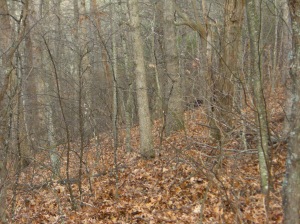 A Bear in the Woods

Late last week I had the opportunity to drive up to the North Georgia Mountains for a couple of days. While there I decided to do a day hike on the Appalachian Trail. Since I viewed the hike as somewhat of a practice venture, I decided that a practice journal entry for the hike would also be appropriate. Even though most of my journal entries while on the trail will be from my phone, this one is being typed at my computer in the comfort of my home. I’ll wait until later to practice writing a journal entry in a tent, with freezing temperatures, snuggled into a sleeping bag, using my phone. At this time there’s no point braving the elements to record the adventure.

Every hike has the possibility of being an adventure. On the Appalachian Trail is seems like daily adventures collectively become one major adventure. When I set out at Unicoi Gap for what I planned to be a 7.2 mile out and back hike to the Cheese Factory camping site, I anticipated a solitary, less than eventful morning. For about 90 per cent of the hike, I was correct. But I’m getting ahead of myself, so let me get back to the beginning of the day.

After arriving in Helen, Georgia, a Bavarian themed village of sorts about 10 miles from Unicoi Gap (at the 50.9 mile mark of the trail), I checked in at a local motel. Since it was approaching sundown, I decided to wait until the next morning to visit the AT. Having already section hiked all of Georgia, I merely wanted to re-acclimate myself to the rigors of the trail. I purposefully left my sleeping bag at home so that I would not be tempted to spend a cold night in the woods. After all, the motel offered a blazing fire in the lobby, coffee and cider, and the chance to listen to a group of dulcimer players who were in town for a yearly convention.

Well getting back to the trail, I awakened just before 6:00 with the intention of starting my hike at 7:00. When I noticed that it was still very dark and a cold mist covered the mountains, 7:30 and daylight began to sound better for a starting time. So I leisurely enjoyed my waffle, sausage, and coffee, from the motel’s complimentary buffet, before driving up to Unicoi Gap. Several of the dulcimer folks were dining as well. Although I thought about engaging one of the couples in a conversation regarding an instrument whose sound has always fascinated me, instead I tried to stay focused on the ensuing hike.

In my car, I navigated the winding road up the side of the mountain toward the gap, arriving at about 7:15. The day was cold and foggy, but the light rain had subsided. When I took my first step on the trail, headed northward, my watch showed that it was 7:25. Although visibility was only fair for the first hour, I made good time reaching the top of Rocky Mountain. I purposefully chose this section for my “practice” hike since there was over a 1000 foot accent during the first 1.3 miles. Since I hadn’t hiked any on the trail in over three years, I wanted a challenge from the beginning. Not really remembering the first time I was at this section very well, the climb seemed a little less difficult than I had expected. There were an abundant number of switchbacks and rock staircases in places as well. With any hike on wet rocks, however, I always worry about slipping. Fortunately I only slipped a couple of times and was able to cover the entire distance without falling.

After reaching the crest of Rocky Mountain, the hike meandered briefly before a descent began toward Indian Grave Gap. There was another less severe climb toward Tray Mountain Rd. just before I arrived at my turnaround point, the Cheese Factory Site. Most of the foliage in the area had dissipated, but the ground cover of varying shades of yellow, red, and orange leaves afforded a beautiful backdrop for a brief respite and a sip of water. Since I hoped to conclude the hike around 10:30, I quickly re-shouldered my daypack and started back toward Unicoi Gap and my car.

Up until this point I had neither seen nor heard any other living creature on the trail. As I began the return trip, sunlight filtered through the few remaining leaves. I paused for another short break at the only vista on this short section and snapped a few pictures of the fog covered mountains in the distance. Peacefulness abounded as I steadily hiked back up the north side of Rocky Mountain to its apex. After another brief rest for water, I started back down the now 1000 foot descent. It was just a very nice day, but what was about to happen would make it even nicer.

Just to my left, about 20 yards in front of me, a rather large black bear came bounding down the mountainside. After crossing the trail, he stopped and looked in my direction. For what could have only been two or three seconds, we stared into each other’s eyes. With what I’ve come to regard as due respect in nature, the bear and I silently connected. Then just as quickly as he had appeared, the bear jogged westward down a slope. When he stopped again, I was able to zoom in for a picture. Although he is at a distance in the photo, I know it’s a bear. As I kept walking, I looked over my shoulder a couple of times to make sure he hadn’t changed directions toward me. So after seeing no people or wildlife for over six miles, I had the good fortune to have a close encounter with a bear on my first hike on the AT in over three years. The bear sighting made my hike complete.

The last mile downhill on Rocky Mountain required a little more diligence than the uphill climb a couple of hours earlier. Still I made it back to my car by 10:35. For my first experimental hike, I had covered 7.2 miles with two fairly challenging ascents in just over three hours. Despite the early morning chill, the foggy conditions, and the lack of companionship, my short day hike of mid-November proved to once again be a very good day on the Appalachian Trail.