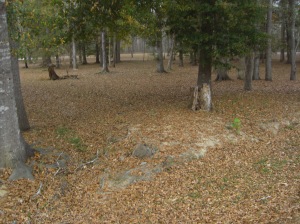 Leafy Trail in the Park

When I coached high school cross-country, I almost always provided the young ladies and young men on my teams with pre-planned daily workouts which I expected them to execute. On rare occasions, however, we would do what I called spirit runs. I use the pronoun “we” because in my 30’s and early 40’s, I did all the workouts with the team. So it was both the members of my teams as well as I who looked forward to these special days. We all embraced the idea of leaving campus for a run on the roads, or trails, or simply through the woods around the school, wherever the spirit led us. A leader would be selected to navigate for a while until another leader emerged from the pack. There were really no specific rules for these runs. We just ran.

These days I usually begin my runs from home, weaving through neighborhood streets to a picturesque park with roads and trails and, yes, even woods through which to roam. Like with my cross-country teams, I know which route I plan to take and how far I’m going to run, before the workout begins. Today was different. As I ran toward the park, I decided that when I arrived there, I would resurrect the days of yore and embark on a spirit run. For about an hour, I ran in parts of the park that I had not traversed in years. I strode down rutted gravelly roads, over dirt embankments, and through unmarked trails, all the time hearing the crackling leaves beneath my feet. And I felt moved by the spirit within me.

At one point as I headed up a short incline, I noticed a solitary lady enjoying her lunch at a cement picnic table under a pavilion. I wondered what items might have been stored in the red, canvas container. Had I been hiking the Appalachian Trail, rather than running through a public park, I might have stopped, engaged her in conversation, and perhaps been offered a morsel from her bag or a cold drink. But on this day the spirit moved me to run, and I complied.

Toward the back of the park a prison crew took a break for lunch. One tall, lanky, very young looking inmate stood by the lake, tossing bread crumbs toward a gaggle of geese that flapped their wings in appreciation. I wondered if he might have been thinking of another time when perhaps he had fed geese or ducks as a child. Perhaps he had stood at this same lake with the innocence of a five year old, smiling as the ducks quacked in his direction. Yet now he stood amidst the beauty of nature, clad in attire which let all around him know that, as his clothing stated, he was a state prisoner.

Around the next bend in the trail, two silver haired ladies approached. They had both tied knit sweaters around their waists, baring their arms on the unseasonably warm early December afternoon. Just before we met, one warned, “Watch out for that root there.” I looked down at the gnarly growth protruding from the base of the oak. There are roots aplenty on the Appalachian Trail. Just as I stepped to my left to avoid this one on today’s run, I’ll need to hike the AT with a watchful eye, always anticipating a potential fall up around the next bend.

When I begin my attempt of a thru hike next March, there may be times that I just want to let the spirit move me. I realize that the white blazes are there to guide me along my way. But I may take a detour now and then. Sure, I plan to pass all the blazes as I walk, but an opportunity may also present itself to meander down to a rushing stream or to a cascading waterfall, hidden away in the woods.

In a section of “Childe Harold’s Pilgrimage,” Byron states, “There is pleasure in the pathless wood.” Despite having directions to follow in life, or blazes to follow on the trail, at times I believe we all want to just set out on our own. We so often move in a rhythm that has been pre-determined for us. We stay in line; we obey the rules; we follow the blazes. At other junctures of our lives, however, we may just want to let the spirit move us. As I ran today the spirit moved me. Most days when I finish a run, I know exactly how many miles I’ve covered. Today I merely estimated. Does it really matter? When we walk or run or hike, isn’t it really the beauty of nature that should take precedence over all other incidentals?

When I leave from Springer I will constantly be in search of the next white blaze. Collectively these vertical, rectangular marks will lead me to Maine. Still, I hope if I’m so inclined, that I’ll take a few minutes now and then to amble into the pathless woods where the spirit leads me. I realize that it can be dangerous to wander too far from the marked trail; therefore, I’ll eventually pause and let the spirit lead me back. After all, what could be nicer than a spirit filled day along the Appalachian Trail.