A Good Day to Hike 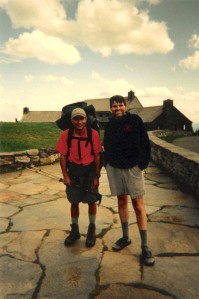 Thru Hiker Junior from Maine and Don’s Brother at Bascom Lodge on Mt. Greylock in Massachusetts, 2004

I hiked today. Just finished 14.8 miles on the Pine Mt. Trail . I’m tired. I’ve changed into dry clothes, put on my new camp shoes, and had a snack. As I sit here on the tailgate of my Explorer, I’m thinking how I’ll feel at the end of a day on the AT. I’m also amazed at how well auto correct works on this iPhone. So If you’re reading this you will know that I successfully wrote, copied, and pasted this entry.

Today was a day that I wanted to check our a few things. I’ve been debating whether or not to carry rain pants. So when I began my hike this morning I decided to try out some Frogg Toggs. With the temps in the high 30’s and a chilly wind, I walked for almost ten miles before I shed them for running shorts. Surprisingly I liked them. They breathed well and were only damp around the waist.

The hike today consisted of the 7.8 mile Big Poplar Loop plus a 3.5 mile each way out and back to Dowdell’s Knob. Terrain was easy to moderate with more easy; however, there were still some areas that reminded me of the AT. At one point there were so many rocks that I thought I had momentarily been transported to Pennsylvania. I also noticed how important it is to concentrate late in the day. On three occasions I slightly tripped just because I hadn’t raised my feet to avoid a rock.

Again like many other weekday hikes up here, I saw no other people for the entire hike. I know that will never be the case on the Appalachian Trail. It got a little lonely at times. I rarely hike with music, so it was just me and my thoughts for over six hours. That can be good and bad. Would’ve been nice to share them with someone. I didn’t even see any wildlife, not even a squirrel.

I thought a lot about my upcoming AT venture and about other hikes on the trail. At one point I remembered something that happened at Bascom Lodge on Mt. Greylock in Massachusetts. A thru hiker from Maine, who Alton and I had met a few days earlier, showed up in the late afternoon. We had gotten ahead of Junior because he had taken a zero day back in CT. After we persuaded him to join us for a salmon meal as our guest, he hoisted his pack to make the next shelter even though it was almost dark. Junior could smell the end. He was ready to be finished. Even when we offered to pay for his bunk he declined, stating that he needed to make more miles before sundown.

As I sit here with sunset approaching, I wonder how I’ll feel if I get that close to completion. So today was a good day to hike…..not too cold, just cold enough to be comfortable. It would be a good night for a campfire on the AT. For me, it’s a half hour drive back to a warm home, a hot shower, hearty meal, and a comfortable bed. There will be time enough for camping once I arrive on the Appalachian Trail.