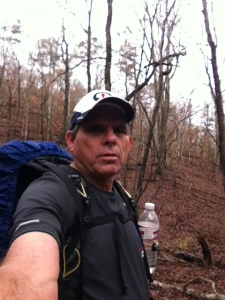 So as I compose this piece from my tent in the dark I’m realizing just how journaling will be on the trail. Hold on just a minute while I try to get comfortable. I’m leaning on my right elbow for the moment. That seems to be the best position. Did I mention that it’s really dark outside. Oh well, it’s only about 12 hours until sunrise.

So this is my shakedown overnight hike to check out my gear for my upcoming attempt at a thru hike of the Appalachian Trail. The day began well. I checked in at the FDR State Park Headquarters to secure my overnight camping permit a little before 1:00. After filling out the registration and.briefly chatting with the very helpful female ranger, I headed down the rock steps behind the building to begin walking east on the Pine Mountain Trail. For today’s hike I decided to hike up the trail to where the PMT connects to the Sawtooth Trail, which is part of the Big Poplar Loop Trail. I hiked for 8.4 miles to this campsite which is really quite nice. There’s a fire ring and some good blow downs to sit on.

After setting up my tent I cooked a Knorr side but must admit that I also had an Arby’s French dip sandwich which I brought with me. Hey, they were two for $5, so I ate one at the restaurant and saved the other for supper. I also brought along some chocolate cookies that I baked last night. After eating I made a couple of phone calls, and that’s about it. I did stop at Jenkins Creek to get some water just before camp and used my Aqua iMira for the first time.

Well, I think I’m going to read for a while and then turn in. Tomorrow I’m going to hike another 13.5 before heading home. I think I hear something walking around, but it’s probably just my imagination. At least I know it’s not a bear. A dog (I guess it’s a dog) is barking in the distance and I can vaguely hear traffic far away at times. Think I’ll read now and then call it a night. Looking forward to many nights like this when I get to the Appalachian Trail.

One thought on “Overnight Adventure”