First Day on the Trail

All in all, it was a very good first day on the trail. The journey began with a drive up a series of mountain roads with the destination of Big Stamp Gap, one mile north of Springer Mountain. Unfortunately, however, after Scotty made a wrong turn somewhere along the way, we wound up at Nimblewell Gap, at the 6 mile mark of the approach trail. So rather than a 9.1 mile day, I hiked 10.9. Officially though, I’m at the 8.1 mile mark on the AT.

As a result of my good buddy’s navigational error, I might be the only thru hiker ever to begin a hike at Nimblewell Gap. It proved prophetic in a way because I met former thru hiker Hopeful on the way up to Springer. He had hiked in 2003 and again in 2011. I had read his journal, so it was a real treat to be able to meet and chat with him. I also appreciated the advice he offered.

Overall, the terrain of the hike today was fairly easy, at least by AT standards. I thought of Don often. I also met several other hikers along the trail including a family of four from Asheville, two section hikers from St. Augustine, and a few thru hikers. Lucky is a young fellow from Ireland who is traveling with a hiker from the Netherlands that he met at the Hiker Hostel. Daypack, who also thrued last year, is here tonight as well. All together there are around 25 hikers at the campsite.

I’m tenting next to a couple of retired army officers who have kept me laughing the entire time I have been writing this with a variety of stories from their pasts and some interesting planing strategies for the next few days. Dave and Phil seem like some genuinely nice guys who served their country in Vietnam. They plan to hike about 700 miles, so hopefully our paths will cross again over the next few weeks.

Well, the campfire is blazing, so now I have to decide whether to remain in my cozy sleeping bag and listen to some music or join the younger hikers by the fire. Since it sounds like light rain is beginning to fall on my tent, I suppose I’ll stay put. Before closing for the night I want to thank my beautiful, supportive wife Linda and my wonderful sister-in-law Lisa for sending me off in style. I’m truly blessed with a loving family. Only one day has passed, but if today is any indication of what is to come, it’s going to be a wonderful adventure on the Appalachian Trail. 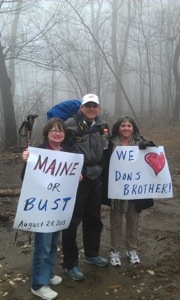 4 thoughts on “First Day on the Trail”