I’m back in the woods tonight. I’m already in my tent at 6:45 and I have no cell service. It’s cold, but not as cold as the past few nights. I have on tights, shorts over them, a short sleeve T-shirt, a long sleeve T-shirt, and a fleece plus two pairs of socks and a stocking cap. I’ve taken my gloves off to type, but they will be back on soon. I’m warm in my 10 degree down bag. I hope I will sleep well tonight.

The day began with a shuttle back to Unicoi Gap with Carol. Red Specs was the only other hiker for the ride up. When we arrived at the parking lot, a tent was set up and the smell of grilled burgers filled the morning air. A group from McConnell Baptist Church provides trail magic as a service to the AT hikers every year. Jeannette Cole listened intently as I explained to her the purpose of my hike. Others were equally compassionate. Having only finished breakfast a short while earlier, I took a burger for he trail. Another nice lady insisted that I take a brownie as well.

The hike out of Unicoi Gap commenced with a climb up Rocky Mountain of about a mile. Once on the ridge, spectacular views abounded on this sunny, yet still cold, day. Occasional snow and ice patches spotted the perimeter of the trail. I started the hike solo; however, about half way up the mountain Red Specs caught me. Hiking much stronger than I remember from our first meeting, he strode along with me for much of the morning.

At the Cheese Factory site(a campsite where a cheese factory had at one time stood), we stopped for a break. As I sat with my back against a tree, eating my trail magic burger, two hikers stopped as they passed. To my surprise, it was Circuit Rider and Sherlock. I had met them on my section hike of the Shenandoah’s in 2006 with Alton. That summer they were helping Queen Diva run the Bear’s Den Hostel. The two have thru hiked multiple times and are out for another walk to Maine. They provide Christian ministry to all hikers who will accept it. Circuit Rider equates himself in a manner to John Wesley and the days of the circuit preachers. Sherlock asked to pray with me. So there in the middle of the Appalachian Trail, my family, my hike, Don’s life , and I were lifted up in prayer. It was a special moment.

Throughout the remainder of the afternoon I continued to be blessed with gorgeous weather and spectacular views, often in more than one direction. I passed a group of three, Tortoise, Longshot, and Gabby, and also came across Rockkicker, a trail maintainer who thru hiked way back in 1984. It was a pleasure to stop for a while and chat as he cleared a patch of icy vines.

As the day passed, I decided to camp for the night and wait until tomorrow to get to Hiawassee. Some other hikers had mentioned Addis Gap as a desirable site. So when I arrived at the forest road which led to the camping area, I headed down the gravelly road despite the half mile walk to the tent site. When I arrived, several other hikers that I had previously met were setting up their tents. The Aussies, Jacko and his son Daniel, or the Invisible Man, were there as were Wilson and Army Ant, whom I had already met. I also was introduced to Mother Teresa and Hiker Boy. Hiker Boy, who is somewhat of a legend on whiteblaze.net, resides on Long Island. After meeting Jacko on Whiteblaze, he decided to quit his job and drive the two Australians from jFK to Georgia. He ‘s hiking part of the trail with them. After we all had supper, it was good to exchange hiking stories around the hiker TV ( a campfire on the trail).

I turned in first, but after journaling for a while I left my warm sleeping bag to join the others by the fire. Most had already gone to bed by then. It was peaceful listening to the rushing stream cascading over the rocks in the distance. As darkness enveloped the campsite, I watched the dying embers of the fire, while standing next to Mother Teresa. 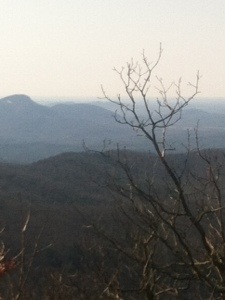 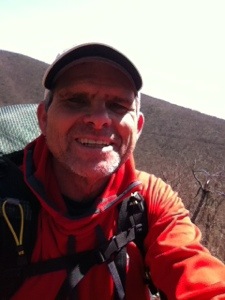 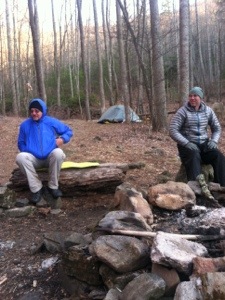