Today was one filled with many ups and downs……in more ways than one. While eating my two blueberry pop tarts for breakfast, I couldn’t help thinking of an old saying by one of my kinfolks, “if I had any ham, I’d have some ham and eggs, if I had any eggs.” Needless to say, a trail breakfast never stacks up to a town one. And as a result of poor nutrition from the onset, I struggled for much of the day.

A climb over Rocky Top awaited me shortly after today’s hike began. The views at the top were among the most spectacular I’ve experienced up to this point. Looking back toward the west, Fontana Dam was visible in the distance. I only paused for a minute, however, due to the high winds. So after a couple of pics, I hiked on. For the entire day, I hiked solo.

Throughout the morning my energy level quickly dissipated. Within the first two hours I was passed by Rocket, Whiskers, Postman, and Puffy, who had all stayed at the shelter previous to mine last night. A little later Grinch and Kermit also sailed by. By the time I reached the Derrick Knob shelter, I was definitely struggling. I took a break to eat and try to rehydrate. Apparently, however, the food was not enough. About a mile after hiking on up the trail, I had to stop for another rest. While sitting on a log, drinking water and eating peanut butter, Grinch and Kermit stopped to check on me. Grinch gave me some jellybeans and both hikers refused to move on until I assured them I was OK. I’ve hiked in the vicinity of these two young men from Marietta, GA for over a week. They are a good representation of how folks on the trail look out for each other. Before hiking on they encouraged me to make it to the shelter where they were staying.

Well, after the break I began to feel much better. I just have to keep drinking all day, especially when it gets warm like it did today. As I continued up the trail, the uphills were relentless. None were that long; they just never seemed to cease. And every uphill was followed by a downhill which led to another uphill. I walked on flat terrain very little of today’s hike. Still, the often panoramic views more than made up for my difficulties.

By the time I reached the Siler Bald shelter, I was feeling much better. After another short break I hiked on to Double Springs shelter where I met up with Rocket, Whiskers, Grinch, Kermit, and several hikers who I had not seen before. The campfire is going and everyone is huddled around as sundown approaches. After a difficult 13.5 mile day (due to how I felt, not to the trail conditions), I have a shorter hike tomorrow into Newfound Gap. I’m definitely looking forward to a town meal again.

The Appalachian Trail presents all hikers with a variety of challenges daily. As I hiked slowly at times today, I could imagine my brother offering encouragement with every step. I made it through some difficulty today, but tomorrow quite probably will provide another day filled with great vistas, fellowship, and opportunity, as most do on the Appalachian Trail. 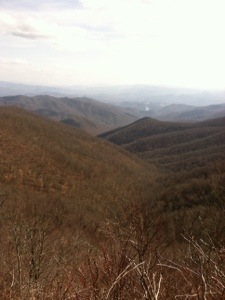 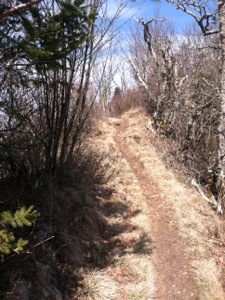 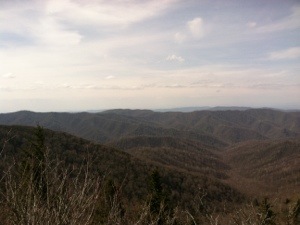 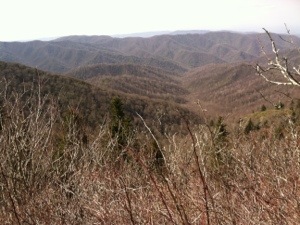 One thought on “Spence Field Shelter to Double Springs Shelter”