Lucky Lucy, a very young looking great-grandmother from Pennsylvania, has been section hiking the AT for several years. She described her passion for the trail during breakfast. It is hikers like Lucy who crave all that the mountains have to offer, even though others, including their families, may not understand. They repeat hikes over favorite sections for pure enjoyment. Roan Mountain was Lucy’s destination today. The excitement of today’s adventure resonated in her voice. She was eager to hit the trail once again.

So after a calorie filled early morning meal, Diane returned Molar Man and me to the trail at Buck Mountain Rd. With plans for Molar Man’s first 20 mile day, we set off a little after 7:00. Early in the hike we walked parallel to the Elk River for a while. I imagined Don standing on the bank, casting into the slowly moving waters. It would seem a certainty that fish aplenty swam beneath the surface. Without really understanding how, Molar Man and I found ourselves on the opposite side of the narrow river. Apparently we had crossed at a small inlet. With numerous water crossings of varying length and difficulty, it sometimes becomes uncertain just where you are in relationship to the bodies of water.

At Cascade Falls we stopped to take in the beauty of the spot. A little later in the morning we came to a bench with a picturesque view. The bench had an inscription in memory of AT hiker Vango. No other details were available. Molar Man and I both reclined briefly to soak in the view and take advantage of the opportunity to rest our feet, even though it was still early in the day. I also took a couple of photos, and then we were on our way.

Like many other days, much of today’s hike was just a trail, complete with dirt, roots, leaves, some mud, and rocks of different sizes. Most was fairly easy despite a handful of moderate climbs. The highlight of the day had to be passing the 400 mile mark, a benchmark I had hoped to hit before I had hiked a full month. Since tomorrow will mark exactly a month since I left Springer, I easily achieved that goal.

One interesting aspect of today’s hike was that it seemed like Molar Man and I had the trail to ourselves. We did see a hiker leaving a shelter headed north, but surprisingly, he never passed us. Other than that young man, we only encountered four others. Orange Peel and Sparky were doing a slack pack southbound day. Don and Tim, northbound section hikers from the area, were taking a break when we stopped to chat. I immediately thought of my brother because Tim was wearing a Cubs cap. After telling the two about my hike, Tim said he had had two friends to die of ALS. Originally from Chicago, he seemed to enjoy our brief conversation about Don, baseball and Wrigley Field.

As the afternoon continued, Molar Man and I took a few short breaks since both of us were getting a little tired late in the day. Approaching the end of today’s hike, we passed an old log barn that looked as if had been abandoned for over a century. No remains of a house were evident. Next to the barn, however, was a small pond. I walked to the edge of the water to observe the large number of tadpoles. Again I thought of my brother. The pond reminded me of one Don and I took Brent and Sam to fish at on property owned by my Aunt Gladys. I still have pictures of the two five year olds holding up fish.

When Molar Man and I finally reached Dennis Cove Rd., Diane was waiting as usual. Before we drove away, two cars pulled up with young folks who appeared to be headed to a scenic area adjacent to the trail, just past the parking lot. We had a snack, rested briefly, and then headed back to Elizabethton. The drive down the winding, mountain road went quickly. Today was another special day. From meeting Lucky Lucy to sharing another hike with Molar Man, all continues to be well in Tennessee, on the Appalachian Trail. 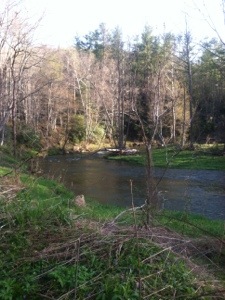 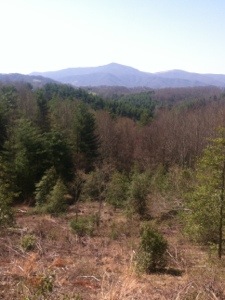 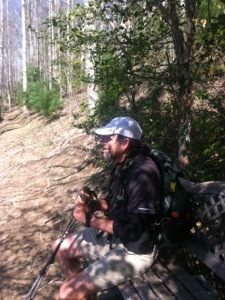