Saturday, April 27: The day began with my third and final breakfast at Cowboy’s before leaving Damascus. Tom, the Raisin Bran Kid, joined me. While we were discussing Tom’s injury, Orange Peel, who was at the next table, joined the discussion with a similar injury of his own. In fact, I’ve met no fewer than six hikers recently with some kind of shin or knee issue. Tom is very discouraged, trying to decide whether to hike fewer miles or return home for a couple of weeks of rest. It’s almost impossible to console an injured AT thru hiker.

During breakfast a gray haired gentleman with a pleasant countenance stopped by the table to ask how we were enjoying our food. When he offered to refill my coffee, I asked if he owned the place. Indeed, I was in the presence of Ken “Cowboy” Fritz. It was a pleasure chatting with Ken awhile. He showed great compassion when I explained about my Hike of Hope for Don. Ken also agreed to a picture with me. So again, I’ve had the honor of meeting an AT legend.

Just about the time I finished my blueberry pancakes and bacon, Journey pulled up in her rental car. Since she had offered to drive me back to the trail in trail angel capacity, I saved the cost of a shuttle again. It was good to share a pleasant conversation with Journey over the winding roads. She lamented that the abundant mountain laurel and rhododendron were not yet in bloom. When we arrived at my drop off point I wished her well before walking back into the woods.

Shortly after beginning today’s hike I passed Toast who was replenishing her platypus at a stream. Then I met Rusty, a recent graduate of the University of Pennsylvania. We hiked in tandem for a brief while. I think he was holding back his pace out of respect since I was enjoying our conversation. Both of the two young folks were at the first road I passed receiving some mid-morning trail magic from none other than Diane, Mrs. Molar Man. People just keep on reappearing on the Appalachian Trail.

Other than Rusty and Toast the only other thru hiker I saw all day was Heartwalker. When I saw him yesterday, I thought he was sectioning. Today he told me his story. He started a thru hike in 2010, but broke an ankle near Laurel Falls. So this year he picked up where he left the trail in 2010 near Erwin. Heartwalker hiked right behind me to Thomas Knob Shelter where he stopped for the night. I also met several southbound section hikers including a foursome from Hillsborough, NC who I told about Don.

After a brief break I made my way on up the trail which included a climb of 2000 feet over the next four miles. The climb culminated with the ascent of Whitetop Mountain at 5190 feet. Once again I was treated to panoramic views at the crest. Even though the sky was partly overcast, I counted seven mountain ranges in the distance. After Whitetop the trail became a mass of gnarled roots for a good while. At one point I caught my foot between two roots which resulted in a fall. It seems like I’m falling about once every three or four days. Concentration is of the utmost importance at all times.

When I reached HWY 601 Diane was again there waiting for Molar Man. I took her up on her offer to sit in the car to eat my lunch. The trail then entered the Grayson Highlands. I almost immediately encountered my first wild pony who walked right up to me and appeared to be trying to get in my pack. Hikers are discouraged from feeding the ponies, so I adhered to the park’s policy, saving my apple for myself. The pony was kind enough to pose for a close-up before I moved on up the trail. Unfortunately he was the only pony I would see the rest of the day.

Since I was trying to reach Massie Gap by 3:30, I didn’t take a side half mile trail up Mt. Rogers, the highest elevation in Virginia. When I discovered the difficulty of hiking over the large rock faces in the Highlands, I was glad of that decision. The tactical hiking delayed my arrival at Massie Gap by about half an hour. During the last mile I hiked briefly with five young ladies from Davidson College who were up in the Highlands for a day hike. When I commented on the challenging rocks, one assured me that she had first aide and was Red Cross certified.

A gentle rain began falling just as I reached the parking lot at Massie Gap which had to be at least a half mile off the trail. Mary Riggins from the Troutdale Baptist Church Hostel was scheduled to pick me up. Not seeing her, I waited about half an hour and then walked to the road to try to get cell service. Finally a car pulled up at the stop sign. I regret not getting the couple’s name; however, they took the Riggins’ number and promised they would call when they got service. A short while later the couple returned to tell me there were two parking lots and Mary was in the other one. It was a relief when she came into sight.

I appreciate so much people like Mary who are willing to help out a hiker. Already at the hostel when I arrived were Titan and Tugboat. The hostel is actually two bunkhouses with four bunks in each, so I’m in one and the two young guys are sharing the other. They did come over to my side for supper and some hiker banter. It was good to converse with the two throughout the evening.

Since there is no phone service in the area, I’m unable to post on the same day for the first time in a couple of weeks. Tomorrow morning I plan to attend Sunday School and church and then take a day off here. The forecast is for more rain, so that seems like a good plan. It’s very quiet in this rural setting. A steady drizzle will lull me to sleep after another satisfying day hiking the Appalachian Trail. 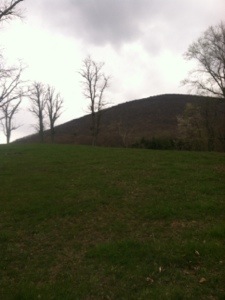 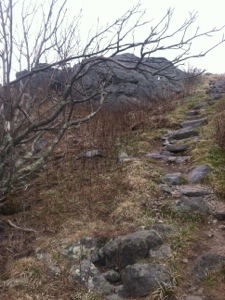 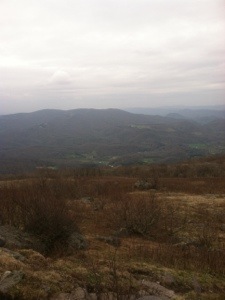 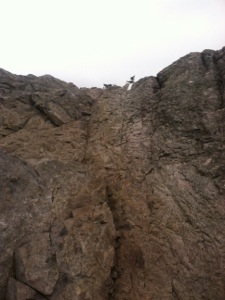