Over the course of the last eight weeks I’ve met a number of interesting folks on the Appalachian Trail. Most recently, Howdy Man appeared just as I was praying that another hiker would be around when I made the descent of Dragon’s Tooth. Having stressed all day over a part of the trail that many say is the first significantly technical section, I feared that I would have to tackle the narrow ledges alone. Then just around a bend on the climb up the southern side, there sat Howdy Man.

After I told him that he was a Godsend, Howdy informed me that he hiked slowly and liked to talk. Letting him know that was fine with me, I listened. Howdy began by actually posing a question. He wanted to know why I was hiking the AT. So I told him about my brother and how his illness and death had been a factor in my decision to hike. Several times Howdy looked over his shoulder as I talked, seeming to appreciate my reasons. Then he explained why he was on the AT.

Although only twenty-two, Howdy said that he had already comprised a “bucket list.” And on that list was hiking the Appalachian Trail. He went on to say that initially he considered eliminating that goal, thinking he would never find the time. Then, however, he decided what better time than now. Even though he has a degree in Mechanical Engineering in hand, Howdy said he has always wanted to be a policeman. He would later talk of small town departments where he might like to work, as I concentrated on getting off the ledges without a slip. For such a young fellow, he appears to have a firm grasp on his future.

With dark clouds overhead and a thunderstorm imminent, I hoped that my new hiking buddy would pick up his pace. He didn’t. Still, I figured hiking over the dangerous stretch with another hiker nearby outweighed passing Howdy now only to reach Dragon’s Tooth alone. As the sky grew darker, we finally arrived at the blue-blazed trail to the monolith. Even though we knew that rain was on its way, we both wanted to see the famous “tooth” before venturing on up the trail. We didn’t linger, only taking a few pics before retracing our path back to the white blazes.

Just about the time we started the climb down, the black flies made their appearance more noteworthy. As Howdy Man led the way, I followed, swatting flies with one hand and balancing myself with the other. Howdy just kept smiling and talking. All was good. Each time I thought we had finally come to the end of the dangerous section, another portion requiring the use of hands appeared. Howdy thought it was great fun, and as matter of fact, after the initial adjustment to hiking without poles, so did I. Howdy Man’s companionship for the descent allowed me to fully enjoy a section of the trail I had been dreading.

When we finally did reach level ground, I hiked on behind Howdy Man until the rain started. Noticing that he had picked up his pace a little, I assumed Howdy would hike with me to the road and walk to a nearby store to dry out. That was not to be the case. When the raindrops got bigger Howdy suddenly stated, “That looks like a good spot,” as he ducked under a tree to pitch his tarp. It didn’t look like that good of a spot to me, but then, I wasn’t the one pitching the tarp. I yelled goodbye before moving on.

Three days later I again saw Howdy on the trail. He asked me if I had tried his “cowboy camping” yet. I told him that I had not, but I’m sure if I do, I’ll remember Howdy Man as I look up at the stars. For a person so young, Howdy resembles many on the Appalachian Trail. He simply walks one day at a time from where he is to where he thinks will be a good place to spend the night. Life can be rather simple when all one has to do is awaken each day to follow the white blazes toward Maine, and the northern terminus of the Appalachian Trail. 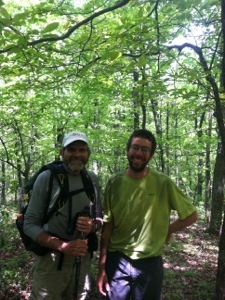 3 thoughts on “Icing the Achilles”