When the day began I didn’t expect to be sitting in a bus on the side of HWY 340, waiting for a deputy sheriff to fill out an accident report. But I’m getting ahead of myself, so first I suppose I need to start with the morning. Actually, I wanted to add some material from last night before I even began the today. I had mentioned that other hikers would probably arrive at Bears Den, and one did. Not only did Ambassador show up, but he also played some on the guitar that he’s carrying on his pack. He doesn’t seem to mind the extra weight. In fact, he’s also packing about a three pound camera.

At 6:00 this morning my alarm and Runner-up’s sounded at almost the same time. Wanting to get an early start so that I could make Harper’s Ferry before the ATC office closed at 5:00, I immediately headed to the kitchen to cook my breakfast. In addition to four large pancakes, I scrambled a couple of eggs and made myself a cup of instant coffee. I also downed 20 ounces of water before leaving the hostel. Pacemaker and Runner-up were having breakfast when I departed. Ambassador was still asleep.

Less than a mile after leaving Bears Den, the trail crosses VA 7 at Snickers Gap. Apparently the speed limit is 80 on the busy thoroughfare leading into DC. It took several minutes before I could find a large enough gap in traffic to dash across. When I got to the other side I met Rock Steady who had stopped for a photo opt with a Snickers bar. Knowing that he would pass me quickly, which he did, I began the first climb of the day. Fortunately, the final four miles of the roller coaster came at the beginning of today’s hike rather than at the end.

Just past the 1000 mile mark a spectacular view awaited at Raven Rocks. When I got there Rock Steady was taking a break. We took each other’s picture, and I told the Californian about my brother and journal. Rock Steady said he has a good friend who was recently diagnosed with ALS. The personable engineer is only the second hiker that I have met in his 40’s. Having only a limited number of days to complete the trail, he hopes to finish in under three months. Since he didn’t start until April 14, he seems to be well on his way to achieving his goal. We would see each on breaks throughout the day.

The day passed smoothly. I stopped for lunch at one of the nicest shelters I have seen-the David Lesser Memorial Shelter. Rock Steady had also stopped for water. Flare, a southbound section hiker and veteran, was drying out some gear. The only other hikers I chatted with were father and son, C4 and Hotdog, from Connecticut and also sectioning south. I saw a few others hiking south, but just said hello, not wanting to break stride with a goal in mind.

After the end of the roller coaster the trail leveled out for much of the afternoon. Other than some flat rocky sections, with some of the rocks being of the pointed variety, the trail continued gentle until the final two miles when it abruptly dropped almost 1000 feet down to the Shenandoah River. After walking across the lengthy bridge, I crossed a street to where the trail continues to ascend until a blue blazed trail leading to the ATC headquarters appears. I walked up the side trail and strolled into the office about half an hour before closing. Peter Pan welcomed me as the 318th thru hiker to sign in this year. I had my picture taken and filled out the required paperwork to be official.

To my total surprise, Mr. Gigglefits and Paisley were in the hiker lounge along with Carpenter. They had hitched from Luray to get a bus to DC and then a train to NY for some music concert. When I asked how they got 70 miles behind me, Gigglefits said they had spent six days at trail days. Ah, the youth on the trail! As we waited together for a commuter bus to Charles Town, Daypack walked up. He had been at the first campsite with me in GA. I hadn’t seen him since early in NC.

So after I left the ATC on the bus with Mr. Gigglefits and Paisley, the almost perfect day began its decline. Shortly after getting on well-travelled 340, a small car with four teenagers inside, sideswiped the bus. For over an hour we waited for the law enforcement to arrive and for all the necessary forms to be completed. Passengers on the bus (there were only five of us) had to show ID and verify that we weren’t injured. The delay kept me from getting to a motel until after 6:00. The bus driver, however, was extremely nice to drive me right up to the registration office rather than letting me off at the designated area.

Even with the mishap, it’s been a very good day. I recovered nicely after yesterday’s fiasco. In nine hours I hiked 19.8 miles with one stretch late in the day where I did three miles in an hour. I met Rock Steady and got re-united with Mr. Gigglefits and Paisley. Tomorrow I’ve decided to take a day off after 17 consecutive days and 266 miles. After a day of rest I’ll cross into Maryland, the sixth state and second shortest next to West Virginia. I must admit that I got a little emotional thinking about my brother as I crossed the Shenandoah River and realized that I was at what many consider the (first) half way point. I could just see Don standing by the river, fishing rod in hand. There will be other rivers and ponds and lakes along the way. I know he’ll like them all as we start the second half of the adventure on the Appalachian Trail. 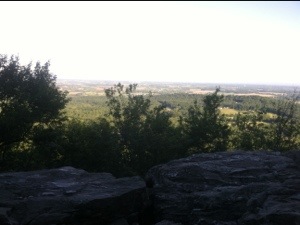 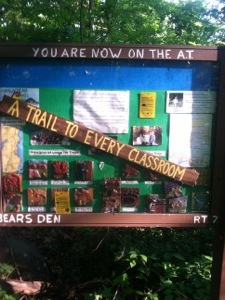 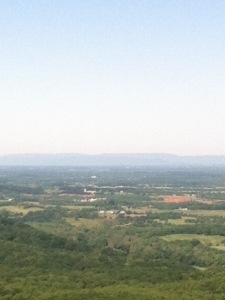 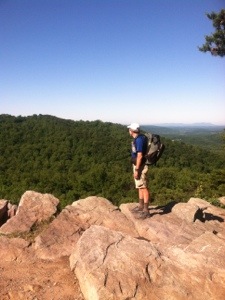