It felt odd starting a hike solo today. It also felt strange hiking with a full pack again after a week of slack packing. Nevertheless, that’s what I did. After breakfast at the motel, I used my first shuttle in several days to return to the trailhead at PA 501. During my meal I overheard a member of a tour group use a phrase I haven’t heard in some time (Well, I’ll be dog!), which prompted me to ask where they were from. When a member of the group said Tuscaloosa, Alabama, I told Bob that I was from Georgia. I also gave him my web site before heading out the front door.

After being dropped off at the trail, I began walking at 6:40. Early in the hike I passed Fis and later was passed by Wrangler. I would see no other people all day until the last mile going into Port Clinton. The trail was lonely today, my friend. As the morning progressed I took a break at Round Head to just enjoy the view. Then I hiked steadily until just past noon when I reached a campsite where Wrangler had built a fire and was cooking some lunch. He explained that the fire was to keep the bugs away. That sounded like a good idea, so I joined him.

After lunch I continued at a quick pace until I reached the Eagles Nest Shelter. I had actually intended to stay the night there; however, since it was only 1:20, I just couldn’t force myself to stop with only 15.1 hiked and seven hours of daylight remaining. So I pushed on. In fact, I covered the two miles from the shelter to Shartlesville-Cross Mountain Road in 38 minutes. While the terrain allowed, I kept up the pace. Then when the rocks appeared, I slowed. Even with some lengthy stretches of rocks, usually small in size, I arrived at the small town of Port Clinton, PA before 5:00, having hiked 24.1 miles with a full pack.

One noteworthy occurrence on today’s hike was that I ran out of water, which is something that should never happen. As the day got hotter I found myself drinking more and not finding any sources from which to refill my bottles. I tried to conserve when I realized that I had little left and about three miles remaining until town. Then the magic occurred. Within a couple of minutes after I had taken my last sip, I turned a corner to find eight 32 ounce gatorades under a tree. It could have been 32 ounces of gold and I don’t think I would have been any happier. I took one and immediately downed half of it. That drink gave me the lift I needed to carefully negotiate a very steep descent to the road. I thought to myself, “I’m glad it’s not raining.”

When I did reach the road by the train tracks, I took a break at a picnic table before crossing the short bridge into Port Clinton. Arriving at PA 61 going into Hamburg, I thought I’d give Microtel a call to check on rates. As I was talking a truck stopped. The lady in the passenger seat asked if I needed a ride. Fred and his trail angel wife drove me right to the front door of the motel. Also in the truck was Fables, a young lady who started at Springer the week before I did. Like so many others, I had not seen her until today. From South Carolina, she was staying with the trail angel couple.

Even though I hiked a ten hour day alone, the miles went quickly. At one point I thought about creating an imaginary hiker friend that I could share the trail with when no one else is around. I gave him a name, a place of origin, and a rather bizarre personality. Perhaps in future days, when there’s nothing else to write about, I’ll include a more in-depth description of the fictional hiker. For now, however, I think I’ll stay with reality. And the reality of the moment is that I need some rest before tackling more big mileage days on the Appalachian Trail. 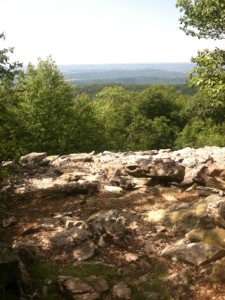