The last time I saw Speck she was walking up the trail out of my hike forever, or so I thought. That day I struggled to limp the final three miles to Jennings Creek where I shuttled back to Daleville to treat my Achilles tendinitis. Today Speck walked back into my hike on a beautiful day in northern Pennsylvania. On the trail for a short section of PA and some of NJ, she appeared when I thought I’d be hiking alone for awhile. Her company was definitely welcomed and appreciated.

My day began with a hitch from Hamburg back to Port Clinton. Two trail angels with a work truck offered the lift as I finished my breakfast at the Microtel. Dale hoisted my pack into the back of the truck as I climbed up to the front seat. His co-worker, Ben, rode in the back. After the short ride I found myself hiking by 6:55. To begin the day I walked under a bridge and up a steep ascent of 900 feet. Before long Speck was hiking with me. We took a break at Reservoir Rd. and then another at Pulpit Rock, which offered another spectacular view. It was hard to leave the beauty, but after a few pics, we moved on.

The trail today afforded us much variety. At one time we were strolling down what seemed like a pleasant country road. At another we were faced with various sizes of rocks to climb over or navigate around. Then there were the short sections of smaller pointed rocks which made finding a place to step challenging. But that’s what the AT in Pennsylvania has been all about…..variety. From the farmland to the rocks, it’s all been good.

Not having seen Speck in over a month, we spent much of today’s hike talking. It was good to catch up with my friend. She told me about the rest of her section hike in VA after we went our separate ways, and I filled her in on my days with Molar Man. Out conversation made the day pass quickly despite the often difficult terrain. We took another break at The Pinnacle, which afforded us another, OK, I’ll use it, breathtaking view. It was there that we saw Scarecrow drying some gear.

One of the highlights of the day came when Speck and I met Under His Wing and In His Feathers. The 80 and 75 year old sisters have been section hiking the AT since they started receiving social security. A true inspiration, they chatted for a good while with Speck who was fascinated with their endeavor. When we reached the road leading to the Eckville Shelter, Bernie the Whittler was waiting by the van. He allowed Speck to select one of his carved figures. Before we headed on, the two ladies walked up, ending their hike for the day.

The last few miles proved a little more difficult, mainly I think because we were tired. After all it was Speck’s first day back on the trail. Still even though the trail caused some difficulty at times, we were able to hike 22.2 miles to the Allentown Hiking Club Shelter, arriving a little after 6:00. Speck was nice enough to boil me some water for a hot meal. The lasagna she had suggested was delicious. I suppose I could get used to this sleeping in shelters and eating trail food if I so desired.

We shared a picnic table, adjacent to the shelter, and good conversation with Shadow and Shade, an older couple from North Carolina. They began their hike in Harper’s Ferry four weeks ago, hiking comfortable miles each day. They hope to get all the way to Maine. They’re just not sure when.

So tonight I’m back in the woods. This shelter is nice. There are even a couple of canvas chairs and two bunks. The shelter sleeps eight, so the four of us have plenty of room. Darkness has arrived. The others may already be asleep. What sounds like a family with five or six boys of about ten or eleven just walked up. They appear to be looking for a place to camp. One said he thought he heard a wild animal. I hope not. I’m tired. It’s been a good day to hike with a friend. Tomorrow we’ll head toward Palmerton, the next town on the map up the Appalachian Trail. 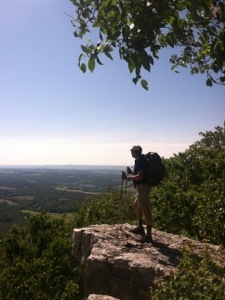 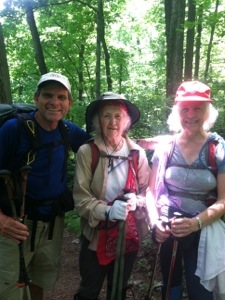 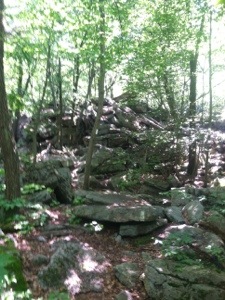