I’m sitting on a blow down at a campsite in the woods. It’s 7:17, sticky warm, and rain is in the forecast. Several hikers are gathered at a picnic table, some cooking supper, others just visiting. Mosquitoes are in the vicinity. I’ve used bug spray. It hasn’t helped. My red shirt, covered in perspiration hangs from a makeshift clothesline in the Gren Anderson Shelter. I’ve put on a dry shirt but will probably sleep in my damp hiking shorts. Because of the expected warm night, I’ll sleep on top of my bag rather than in it. There are eight slots in the shelter. All are full. Looking into the shelter from left to right will be Pilgrim, Lentil, Pfeiffer, Speck, Don’s Brother, Kudo, Medicine Man, and Bob. It may be a tough night for sleep.

The day began with a shuttle back to the trail from Shamrock. Light Bird, an injured section hiker, was also in the truck. A doctor and soldier who has been deployed four times, Light Bird has been sectioning for a few years. He and Shamrock both expressed concern and compassion when I told them about Don. I thanked them both before heading up the trail with Speck. Shortly after the day began we saw Medicine Man and Kudo resting by a brook. For the remainder of the day Speck and I would hike off and on with the two.

The trail today consisted of a couple of sections of medium size rocks, more small rocks, some pine straw areas, and a few ridge views. Rattlesnake Mountain offered the best view of the day. Speck and I took a break there to just relax and enjoy. Despite the intense heat of a 93 degree day, all was good. I drank water and gatorade regularly. Still it was tough to stay hydrated.

When Speck and I reached Culver’s Gap, we walked about 200 yards up the road to Gyp’s Tavern. I’m not sure who Gyp was; however, there is an autographed picture of him with Babe Ruth in a glass case. I had one of those, “I need to call my brother” moments. Don would have loved hearing about the pictures of the Babe. I miss those baseball conversations that we had so regularly.

Gyp’s is a real nice place. The tavern owners have made it real easy for hikers to find their way around. Signs were posted that told us where we should leave our packs, where we could enter the tavern, and where we should and should not sit. Before Speck and I ordered, Medicine Man and Kudo arrived and joined us at our table. I ordered a burger, fries, and a turkey sandwich for the woods. Along with a root beer over ice, it made for an outstanding meal prior to the walk to the shelter. Before leaving the establishment, a local patron suggested that I take a bottle of whiskey rather than my re-filled water bottles.

On the final three miles to the shelter, Speck and I paused briefly to chat with a section hiker from Capetown, South Africa. Then we tried to pick up the pace as thunder could be heard in the distance. A light shower began just before we hit the short blue blazed trail to the shelter. When we walked up, Bob, a section hiker from just north of Manhattan, Lentil, and Pfeiffer were already inside. Shortly after we got here, Medicine Man, Kudo, and Pilgrim also arrived. So the eight person shelter is at capacity on a steamy night.

Darkness is approaching. A large group of young folks, who apparently drove to the campsite and are tented nearby, are noisily enjoying themselves. My shelter mates are trying to get comfortable in a cramped environment. I am sleeping in the woods and all is well. Kudo to my left is gazing toward the bear box. Speck to my right is busy with her phone. Pilgrim and Pfeiffer are still seated at the picnic table with Lentil. No one is asleep. I’m not really tired and doubt that I’ll sleep much tonight. Still, all is good. I’ll wake at dawn, pack up with the others, have a little breakfast, and head north for another day on the Appalachian Trail. 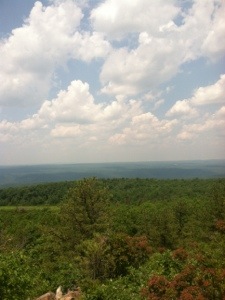 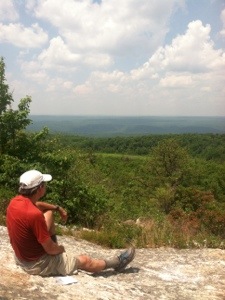 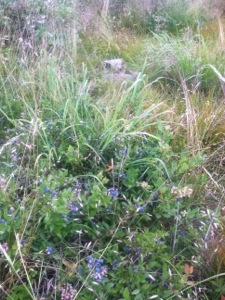 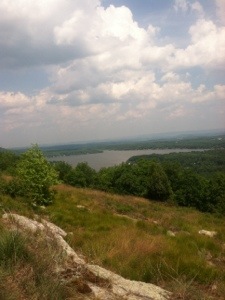 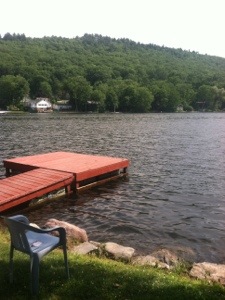 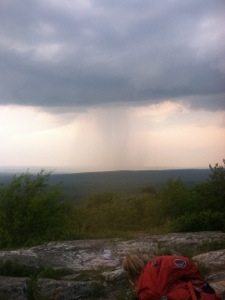 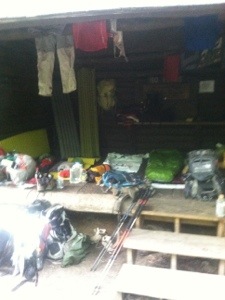 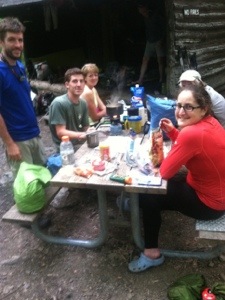 One thought on “Gren Anderson Shelter”