“Old age hath both its honor and its toil,” stated Tennyson in his poem “Ulysses.” Today I felt old. I don’t really consider there to be any honor associated with this hike, but there sure is a lot of toil. It took me over seven hours of hard work to cover a mere 12 miles on another hot, humid, buggy day in New York. With multiple rock scrambles and several areas of poorly blazed trail, my frustration level was exceeded by early afternoon. If not for the knowledge that I would again be sleeping in a bed and eating a restaurant meal later in the evening, the hike would have been unbearable. OK, I sound like I’m whining. I suppose you could say I am.

When my alarm sounded at 7:00 I had to coax myself out of bed to resume the walk. I bid Breezy Point adieu and headed back toward the trail via HWY 210. After a quick stop at the Country Grocery, I started looking for a breakfast establishment. Murphy’s, a bar and grill with a prominently displayed sign advertising country breakfasts on weekends, caught my eye. Two couples dined on the front veranda; however, I was the only patron in the dining room. (Note the use of the semi-colon, if you’re reading this, Chin Music.). Strangely enough, several folks were already at the tavern. Some were at the bar; others were shooting pool.

My breakfast was quite appetizing even though I still couldn’t get grits. The portion of eggs looked outrageously large. It seemed more like four than two. While eating, I inquired of my waitress if there was a taxi service in town. The bartender called for me and even paid the $10 fare. That was some good magic to start the day. Before I left the restaurant one of the ladies who had been dining outside stopped by my table to ask about my hike. Mary, the local librarian, asked, “Are you having fun?” “No,” I replied. For a second I couldn’t believe how quickly and easily I had uttered the word. Finally, I’ve said out loud, “This hike really isn’t very much fun.” We chatted briefly about its perils until my cab arrived.

When I got back to the AT I met Jeremiah, a hiker whose name I had seen in the registries but not encountered on the trail. I hiked up the trail ahead of him and didn’t see him again until the end of the day. From the beginning of today’s hike I kept asking myself why I had remembered this section as enjoyable. My memory is fading fast. It was downright treacherous and frustrating, (from this old man’s perspective) all day. Beginning with the Eastern Pinnacles, I found myself using my hands often. What concerns me more and more is how tentative I have become on dangerous sections. At one point I sat down to negotiate a rock about ten feet long and three feet across. A short while back I would have just strode over it. Noticing that there were potentially fatal drop offs on both sides, I just couldn’t do it. I fear I have lost my confidence in my balance. With the most difficult part of the hike still remaining, I need to regain it.

When I got to Cat Rocks, I took the trail around rather than use my hands to climb up the boulders. It was the first time I have done that. I just don’t feel steady these days. Other than because of the falls, I don’t know why. The other issue with today was the blazes. At least a half dozen times, I had to wander around looking for a blaze to be sure I was hiking on the trail. So much of today’s trail was undefined. It was leaves, rocks, and roots, but often without a clearly defined pathway. And like the past two days, the heat and humidity slowed me drastically. I was already so depleted after 6 miles that I decided to change my plans for the night. I called the Bear Mountain Bridge Motel and made a reservation. Then I arranged a ride. Four hours later I was thankful I had.

There were, however, some positives today. Fitzgerald Falls with the adjacent AT steps captures all that is beautiful on the trail. I also disrupted a doe from her nap. In fact I almost stepped on the deer who was resting no more than a yard off the trail. She stood up, looked at me walk by, and then continued grazing. I also saw a snake sunning itself. I think it was a non-poisonous one. At the top of Arden Mountain I enjoyed a nice chat with two day hikers. They knew little about the trail, so I shared my website with them. They also gave me some information about the area. After leaving them I gingerly descended a steep, rocky section to NY 17 from where I would ride into Fort Montgomery. Unfortunately I had to wait over an hour for the ride.

The trail today again offered a variety of challenges. Since I stayed vertical, I met most. Still, it was hard. I found myself thinking of Medicine Man and Kudo, who just weren’t having fun anymore and are now home with their loved ones. I thought of the 1377 miles I’ve walked and of the 806 remaining. I thought of the good days and the bad. So even though I kind of envy my fellow thru hikers who have returned home, I will continue. Despite the pain, frustration, and mental fatigue, there’s a finish line that needs to be crossed on a mountain in Maine. I will continue. 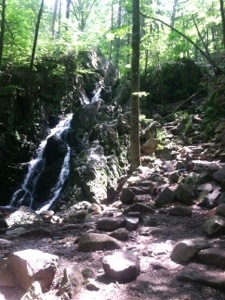 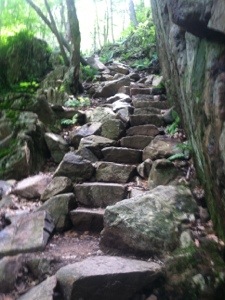 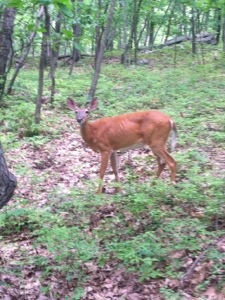 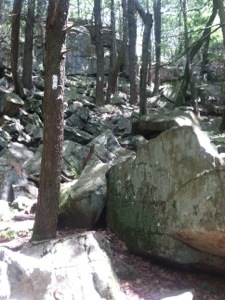 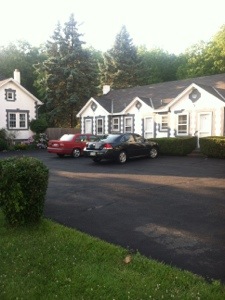