Maybe I need to rethink my “no tent” philosophy. When I arrived at the RPH Shelter last night, I thought I was getting the next to last bunk. When I turned in for the evening, however, only Johnny Walker had decided to tough it out in the shelter. After the mosquitoes made their presence known, everyone else set up their tents or hammocks in the grassy area adjacent to the cinder block building. With both ends of the structure open, JW and I were fair game throughout the night. With the night too hot and muggy to fully get inside my bag, I opted for a long sleeve shirt and another coating of bug spray. I’m not sure how many bites I had this morning, but I actually slept quite well. After awaking at dawn, I dozed until my watch alarm sounded at 6:00. As I began packing up those who had tented followed suit. The humidity had to be 100% as I hit the trail at 7:12.

Even though I was the first to leave camp, within the initial hour I was passed by Misery, Johnny Walker, Tugboat, and Chickadee. The young folks always smile and speak respectfully as they leave me in their dust. They hop over the rocks as if the obstacles don’t exist. I pause and calculate my next step to try to ensure I won’t fall. Speaking of which, I had five consecutive “no fall” days until about half an hour before today’s hike concluded. Oh well. It wasn’t a bad one, and I suppose I can start a new streak tomorrow. At least the fall didn’t involve a rock or mud.

Since I had only dined on leftover pizza for breakfast this morning, I walked the 0.4 miles up the road to the Mountaintop Market Deli when I reached NY 52. Even though it was mid-morning, I ordered a breakfast sandwich and drank two chocolate milks. The proprietors had placed a plastic lawn chair next to an outside outlet, so I was able to charge my phone as I ate. I also refilled my water bottles and bought a root beer and Gatorade before leaving. I also must confess that I napped for about fifteen minutes. It made for a nice interlude to battling mosquitoes. All in all I hung out at the little market for well over an hour.

Before leaving I ran into Torch, a young hiker that I had last seen on McAfee Knob when he and his buddies, Rango and Half and Half, had taken some pics of me. Torch is farther north on the trail; however, he’s back in the area for a big 4th of July thru hiker bash sponsored each year by a local fellow named Bill. Unfortunately, however, he said his two buddies have gone home. When I got ready to return to the trail, Bill gave me a ride. I thanked him for the invitation to the party, but explained that I had a friend from home joining me for the next few days. Bill is shuttling hikers around all day to allow some slack packing, especially for those who skipped this section, knowing that they could hike it when they returned to the area for the 4th. When I resumed my hike I met two of them, Bulldog and Trucker. The last time I saw Bulldog, he was returning to the Super 8 in Erwin with a bag of a dozen cheeseburgers. It was at Cowboys in Damascus that I had last seen Trucker. Both hikers immediately recognized and remembered me. It was definitely good to catch up with the two.

In the early afternoon I took another break at the Morgan Stewart Shelter. Funnybone, Tugboat, and Chickadee also were hanging out there. Funnybone wasn’t sure what his plans were for the day; however, Tugboat and Chickadee were utilizing Bill’s trail angel generosity to get in a slack pack as well. I remembered staying at this shelter on my section hike of NY. After about a ten minute break I headed back onto the bug infested trail. For some reason they didn’t seem as much of a nuisance at the shelter. Perhaps the varmints prefer moving hikers over stationary ones because once I began walking, they attacked again. At least with my continued one pole hiking, I have a free hand to swat.

Maybe it was due to the calories, for I hiked with renewed enthusiasm throughout the afternoon. The final 3.3 miles passed quickly. I only stopped for one minimal view, the only one of the day. When I arrived at NY 55 I was fortunate to meet two very special trail angels, Cynthia and Todd from DC. Having just finished a day hike southbound from the Dover Oak, they had to return to pick up their car. When I told them I’d like to get to a motel near Wingdale, they kindly agreed to take me. I can’t say enough about how good it feels to be given a ride by strangers. Their generosity sure topped off a pretty good day in nice fashion.

While hiking today I really enjoyed running into Trucker. He likewise seemed glad to see me and commended me on still being on the trail. Many have offered encouragement, both on the trail as well as in the regular world. Not that others’ haven’t been, but Trucker’s words just seemed so sincere. I hope our paths cross again somewhere up the trail. As for tomorrow, my followers are in for a real treat, I think. My good running buddy and ultra marathoner, John Teeples, is coming up to hike with me for a few days. I’m sure all his friends back in Georgia will be eagerly awaiting John’s indoctrination on the Appalachian Trail. 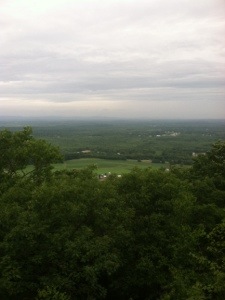 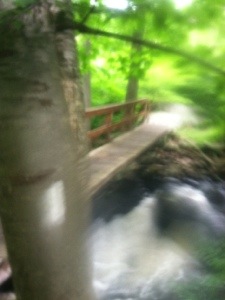 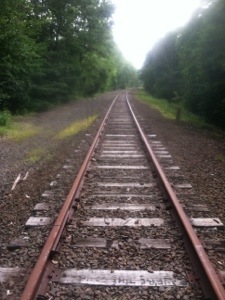 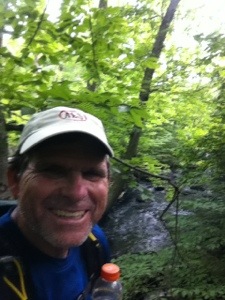