As a young boy I would spend time each summer at the home of my grandparents in rural Alabama. My parents would typically leave me on a Sunday. My mom would return for me at the end of the week. Even though I loved my grandparents and knew that I was in for a fun time with them, it always felt lonely when my parents drove away. Today I felt that same Sunday lonely on the Appalachian Trail.

One thing I learned today is that if you want to dawdle while hiking the AT, don’t plan a 22.3 mile day. Still trying to hike happy and enjoy all the sites along the way, I found myself trailing my buddies early in the day. For the first four miles the terrain was about as gentle as any the trail has had to offer. The day began with Fatty and Mike joining Pilgrim, Banzai, and me. At the trail to the Inn at Long Trail where the AT and the Long Trail split, Fatty left us to pick up a package. A little later Mike also turned to head back to the car. He plans to do a little out and back day hiking while serving as our support person.

Early in the day we walked through Gifford Woods State Park. Many weekenders were busy at their campsites. From there we soon passed Kent Pond. I couldn’t resist walking out on the dock for some reflection. Peering into the water, I hoped to see a fish. None were there. Canoes and kayaks lay on boggy grass near the bank. One lone canoe appeared at the far end of the pond. Since I took a long break I had to hustle to catch my friends within the next couple of miles. It was there that the first surprise of the day occurred, and it wasn’t a pleasant one.

I had thought that the AT in Vermont only had three significant mountains, Stratton, Bromley, and Killington. Somebody forgot to include Quimby. Everyone in our group agreed it was the toughest of them all. We ascended almost 1300 feet over just one mile. That’s a climb folks. After the struggle up Qwimby we walked at a steady pace to the Stony Brook Shelter where we stopped for lunch. While there Fatty joined us. It was the last time we would see her all day.

For the remainder of the day I just hiked, seldom even looking to see how many miles were left. Feeling often like the day would never end, I hiked alone for at least three hours. That’s when the loneliness set in. At one point I hummed “I’m So Lonesome I Could Cry.” Still I hiked. Even though there were no significant views, the climbs in the afternoon were minimal. I would go so far to call the final nine miles kind of boring. At the turn for the Lookout Banzai and Pilgrim had taken a break to let me catch up.

So for the final three hours Pilgrim and I hiked together as darkness approached. I commented that it was the right time of day to see a bear. We didn’t. We hiked without talking for awhile; we hiked and talked for awhile. Despite a hiking companion, that Sunday lonely feeling continued. I thought about having 465 miles remaining after today and felt lonely. I thought about having already hiked over 1700 miles and felt lonely. It was almost 8:00 when I finished what I can only describe as a day in which I couldn’t get past a feeling of loneliness on the journey to Maine along the Appalachian Trail. 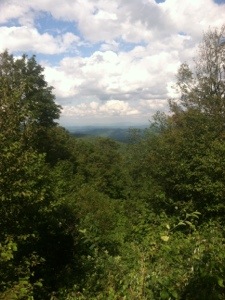