Every day presents challenges on the Appalachian Trail. From rugged climbs to an often continuous sea of roots, rocks, and mud, I have to remember to focus virtually every step of the way. Twice today I lost that concentration and fell. Neither caused any harm; however, each just reminded me of how important it is to watch every footfall. The first occurred when I lost my balance on a wet, mossy rock. I was suddenly staggering forward unable to stop my momentum until I hit the ground. Slippery black mud caused the second. Or should I say my inability to stand on the slippery mud resulted in the mishap. Regardless, I’m reminded that potential danger is always lurking. With the Whites in my immediate future, I best be aware.

The day started at Lou’s Restaurant and Bakery, a mainstay in Hanover, NH since 1947. Located just a block from the Dartmouth campus, decor in the establishment doesn’t seem to have changed much over those 66 years. The gang and I ate heartily inside before adding a complimentary thru hiker pastry from the assortment outside. As we prepared to hike on up Main St. (by the way, Lou’s is on the trail), several other hikers walked up including Johnny Walker, Puffy, Spoon, and Gator. We would see all of them throughout the day as we began the first day in New Hampshire.

Today’s hike began simply enough. With a road walk up Main St. and then past the Dartmouth football stadium, we didn’t hit the woods again for nearly a mile. Friendly folks on bikes and in cars appeared to be headed to classes or work on a pleasant New England morning. When we did reach the woods, the trail only slightly changed elevation for the first six miles. At that point we commenced the climb up Moose Mountain for around 1500 feet. With less than treacherous terrain, the gradual ascent didn’t pose any real demands. At the south peak Banzai, Slim, Pilgrim, and I stopped for lunch. Several other northbound hikers had also taken a break including the group we had seen at Lou’s.

Mike was also slack packing Johnny Walker, Puffy, and Spoon. Spoon decided to carry no pack. Banzai put Spoon’s water in his pack. At another break Spoon entertained us (or I should say attempted to entertain us) with a standup routine about thru hiking. The retired postman from Minnesota may have found a new career. After the show we continued to make good time to the north peak of Moose Mountain and then down to Goose Pond Rd. where a man and woman were cooking some hot dogs for the hikers. Banzai had hiked on with the other young guys, but Pilgrim, Slim, and I each had one. A southbound thru hiker was also enjoying the trail magic.

From the road we climbed a steep unnamed mountain to Holts Ledge. I don’t know why the 1000 foot climb over two miles had no name. It surely deserved one. From there we descended to Dorchester Rd. where we ended today’s hike. It was during this last downhill stretch that I had the falls. After going completely through Vermont vertical, it was disappointing to see my streak come to an end. Trying to stay positive, however, I think perhaps someone was sending a reminder that I need to always remain cautious. If there’s one thing I need to do it’s stay on my feet because there are many tough days ahead on the Appalachian Trail. 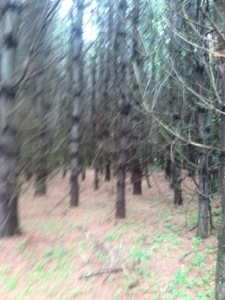 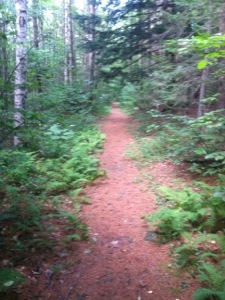 2 thoughts on “Hanover to Dorchester Rd.”