Howling winds awoke me several times throughout the night. When my watch alarm sounded at 5:00, a blustery day awaited. It took a tremendous amount of determination to leave the comfort and safety of Carter Notch Hut for a day in the elements. When Pilgrim, Susquehanna Slim, and I departed from our overnight accommodations, the wind chill was below freezing and wind gusts on the peaks were expected to reach 60 MPH. Fortunately there was no rain in the forecast. I began the day in running tights under my hiking shorts, a fleece, my rain jacket, gloves, and a toboggan. It was downright cold!

The hike today began with a climb up to Carter Dome at 4832 feet. At the summit the wind gusts made it impossible to stay very long. From Carter Dome we descended briefly before summiting another 4000 footer, Mt. Hight. It was here that we made a tactical error, or should I say another tactical error. When we reached the summit we took the wrong trail off the top and inadvertently hiked in a circle for about a mile, eventually standing by a trail sign that we had already passed. It was disheartening to have to repeat a portion of trail, especially since we were only hiking about a mile an hour.

When we got going in the right direction, we walked through Zeta Pass before summiting two more 4000 footers, Middle Carter Mountain and North Carter Mountain. The surprise of the day came on the descent of North Carter. We were greeted with a series of extremely slick, dangerous rock slabs. On a scale of 1-10 my stress level registered about a 12. Perilous is an understatement. To try to keep from falling to my …….., I hugged the tree line at times and at others sat down and inched myself down the wet, slippery rocks. It was nerve wrenching.

By the time we got to the trail to the Imp Campsite, it was past 1:30. We had only hiked 6.9 miles in almost seven hours. Realizing we still had 8.0 miles to hike and less than seven hours of light, we considered our options. The preferable one was to reach US 2 and a motel room in Gorham. Option two was to stop at the Rattle River Shelter, a little less than two miles from the road. Darkness would dictate out decision. After the trail to Imp we were confronted with one more climb, 3991 foot Mt. Mariah. With only a few stretches that required rock climbing, we reached its peak around 3:15.

From there the trail became much more agreeable. Running parallel to the Rattle River for a while, and crossing the river twice, the trail finally allowed my stress level to fall back to a 1 for the remainder of the afternoon. The final three miles, in fact, consisted of a gentle path. It was the first I can remember in the Whites. So Slim set his three mile an hour pace as we headed for the road. We reached it a little before 7:00, still meaning it had taken 13 hours to hike 14.9 miles.

When we arrived at the road Slim phoned Bruno for a shuttle. In the meantime a car with Tennessee plates stopped to ask if we needed a ride. When Bruno showed up in his small truck Pilgrim and I took the offer from Rainman. Rainman and Professor plan to continue a section hike tomorrow on Mt. Washington, which will end in a few days at Grafton Notch in Maine. Slim rode with Bruno. When we got to the hostel my buddies and I decided to upgrade to a motel room with three beds.

Today proved to be another challenging one. The steep, rocky descents and ascents can unnerve even the most seasoned hiker. For me, they can be downright petrifying. Every time I find myself in a precarious position, I think that I just want to be on firm ground at sea level again. Then when I get to town I have to immediately begin getting myself prepared mentally for another day of danger. The Georgia poet James Dickey once said, “if you’re bored with life, risk it.” I’m not bored, but sometimes I surely feel like I’m putting it on the line. So tomorrow I’ll head back up to Mt. Washington to walk north off its summit up the Appalachian Trail. 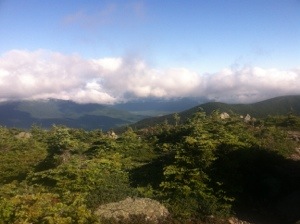 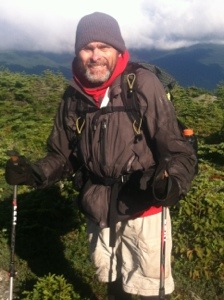 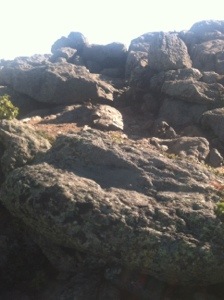 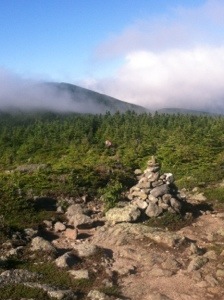 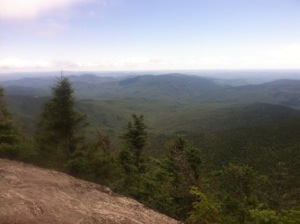