The Whites are done….and I survived. On another postcard like day, I hiked up and over arguably the most difficult mountain in the Presidential Range, Mt. Madison. It was tough. No, it was beyond tough. It was ridiculously difficult. It is a mountain I may admire at a distance in the future. It is a mountain I never intend to step foot on again. Once was definitely enough. On that stress level of 1-10, this time I hit about a 15. With focused, deliberate steps, I managed to stay upright. Still it took almost two hours (1:50 to be exact) to reach the summit from the Madison Spring Hut. Distance: exactly one mile. And after reaching the summit, there still remained the equally nerve wrenching descent. It was tough, even rougher than the climb, but I did survive.

The day started with another pots and pans clamoring in the kitchen at Madison Spring Hut at 5:30. We thru hikers who were sleeping in the dining area had to pack up and be gone by 6:30 when the tables were set for the paying guests. I had pushed two benches together to make myself a bed last night and slept rather well. After packing my gear and consuming two pop tarts and some cheese with a cup of hot tea I purchased for $1.00, I was out the door. Official start time for today’s hike was 6:44. Since Molar Man wanted to do some reconnaissance work for the next few days, he and Susquehanna Slim left about a half hour earlier.

Looking up at the massive Mt. Madison made me a bit queasy even before I began the ascent. A sea of various size boulders, many at a variety of angles, awaited my every step. Few were flat. Many required hand maneuvering to navigate. Each offered a challenge. A false step at any moment could have proven disastrous. I walked carefully, often using my hands to steady myself. I even telescoped down one pole and placed it in my pack. That allowed me to have one free hand at all times. The painstakingly slow climb played on the nerves. Still I paused often to admire the views in all directions. The day was so clear that the buildings on Mt. Washington were visible.

Throughout the morning Pilgrim hiked ahead and waited every few minutes.
After over three hours we finally found ourselves below tree-line. The steep downhill continued, but at least trees lined each side of the trail. A stepping stone pattern offered an easier descent at times. At others rock faces required more thought. Occasionally, although rarely, a level portion of trail appeared. Usually it was short-lived and often muddy. Even in the Whites, black mud happens. Despite the mud, these brief respites were appreciated. It was over four hours into the hike when Pilgrim and I finally reached the Osgood Trail intersection. We had walked three miles.

About this time we caught Bird and Bella, a hiker from Pensacola. I hiked behind them for much of the afternoon and enjoyed chatting with Bella. She told me that she had recently retired from the US Navy. I also met southbounder Potter, a young man from Tennessee. Potter is a potter who said he had started his thru hike exactly a month ago today.

So as the afternoon progressed the trail became more agreeable. At each intersection Pilgrim and I conferenced to make sure we were on the AT. Blazes are often infrequent in New Hampshire, and the AT coincides with other named trails. The final trail it uses before reaching Pinkham Notch is the Old Jackson Rd. Trail. This trail crosses the Auto Rd. to Mt. Washington. Pilgrim and I took our final break here before “taking it to the house.” The trail gratefully transformed into a “trail” again for those last two miles.

When we reached the visitors’ center at Pinkham Notch, I phoned Maryann at the motel/hostel for a shuttle. Bird and Bella shared it into Gorham. Slim already had a room and had bought some special snacks for Pilgrim and me. Later we went out to eat and then to Walmart to re-supply for two nights in the woods. I am about to be in one of the most remote parts of the entire trail, so my entries may not be as forthcoming over the next few days. I just don’t know. I’ll keep writing and post when I have service. As I get ready to head into Maine, I continue to appreciate all the support and prayers. After tomorrow, one ore state on the Appalachian Trail. 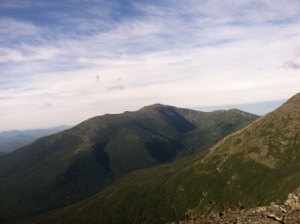 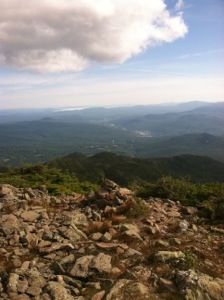 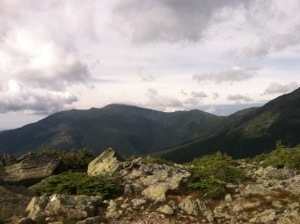