Somewhere in the Wilderness

If I had to use one word to describe today on the Appalachian Trail it would be “wet.” From light rain to wet slippery rocks, to wet slippery roots, to wet slippery mud, it was all wet. And as a result of a wet trail, by day’s end, I was a bit wet myself. Wet shoes, wet socks, wet fording shoes, and, to some degree, damp pants accompanied me throughout the later stages of today’s hike. After last night’s heavy rain many sections of the AT had become streams themselves. Other portions, quagmire-like, waited patiently to quickly turn a blue shoe black. All day there was “water, water, everywhere.”

For the first time in, well, I can’t remember when, Molar Man and I started the day not sure of where our final destination would be. We knew that Sweet Tooth would be parked at a road crossing the AT; however, it was uncertain to us whether the road crossed the trail at 12 miles or at 15. When we got to the Nahmakanta Stream Campsite and found no road, we realized we would be walking three more miles. Still we covered today’s distance in right at seven hours with two breaks. Considering the delays when we reached two water crossings, we made good time.

Like other recent days we passed several bodies of water. Mud Pond was the first. It looked like the perfect place for a moose to inhabit due to its swampy appearance. I stared in all directions but sited none. A little later the trail curled around the banks of Jo-Mary Lake for nearly a mile. A sandy beach area practically touched the trail. On a sunny warm day this would have been a great place for a swim. Even in the light rain, it seemed very peaceful. As Molar Man and I passed a ray of sunlight tried feebly to peek through the clouds.

Next we stopped at the Potaywadjo Lean-to for a short break. Rich and Double Nickel were there as well. The shelter’s roomy privy was about as nice as any I’ve seen on the AT. Complete with a window curtain and sky light, it also sported an interesting sign inside. “Latch door when leaving or porcupines will eat this building.” Funny, I haven’t seen one of those critters the entire hike. After leaving the shelter we passed Twitchell Brook, Pemadcook Lake and then Deer Brook. I already said it was a wet day.

The first major challenge of the day caught us by surprise when we reached Tumbledown Dick Stream. Listed in AWOL’s AT Guide as a ford, we did not anticipate what we found. Due to the excessive rain last night the stream had swollen to the point where there appeared to be no place to safely walk across. There were also no rocks above surface to hop. Molar Man walked about a hundred yards up stream to try to find a suitable place to cross without success. So reluctantly I followed my friend’s lead as he walked out over the rushing water on a blowdown to a boulder in the middle of the stream. From there he hoisted himself up on the rock and then positioned himself to gingerly slide on his pants across another blowdown. We didn’t take any action pics because I think we were both too petrified. I did get one of the spot after I was safely on the other side.

As I was crossing in the same manner as Molar Man, Birdman, an older section hiker, arrived at the stream. He followed me across and gratefully thanked me as I offered him a hand for the final step. The whole process was a bit unnerving. This trail just never lets up. On a day when it looks completely flat, it taunts us with swollen streams and relentless mud. The hiker can never win. We just have to try and compete. Thankfully, all three of us succeeded with the trial thrown at us today.

A little later we reached a branch of the Nahmakanta Stream which was fordable. Molar Man and I changed into our “water” shoes and easily walked across the narrow stream that was only ankle deep. On the opposite side metal steps were placed against the bank due to its steepness. While we were putting our hiking shoes back on Birdman showed up and just walked across in his boots. I suppose they were already wet, or maybe he didn’t carry fording shoes.

From the stream we hiked on through the puddles and mud to the pick-up location. I tripped on a root and fell during the final three miles. It was my second fall of the day. The other was on a slippery rock. That makes seven falls in the last three days. I’m trying to stay vertical. It’s just sometimes hard to do so. None of the falls have been serious. I’ve gotten up right away each time and have only bled once from a small scrap on my elbow.

So today was an OK day despite the trail conditions. After we reached Sweet Tooth we all drove up to Abol Bridge to check out day after tomorrow’s rendezvous point. On the drive up on Golden Rd. we were treated to an even closer look at a partially cloud covered Katahdin. The view gave me a little queasy feeling when I realized I would be climbing up that majestic mountain in a few days. The scouting trip proved successful as we found out all the details regarding checking in at the ranger station for our summit. From there we headed back to Millinocket where I’ve had a relaxing evening. Tomorrow it’s back to the wilderness where I hope to stay dry for just a little while longer on the Appalachian Trail. 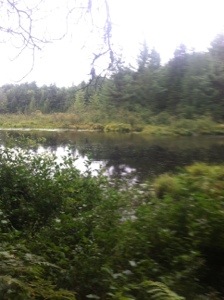 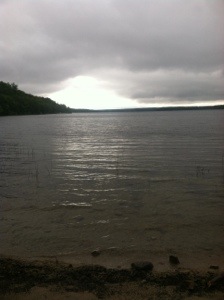 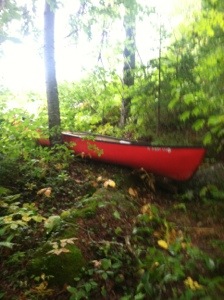 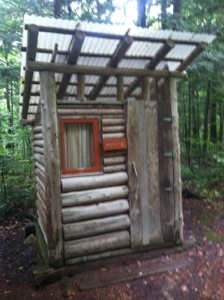 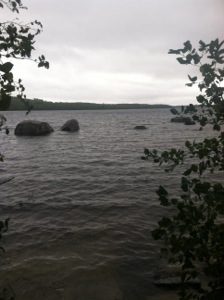 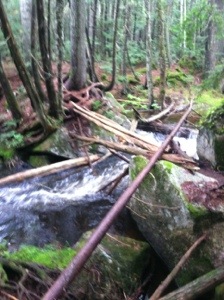 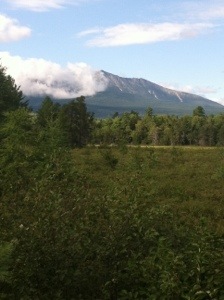 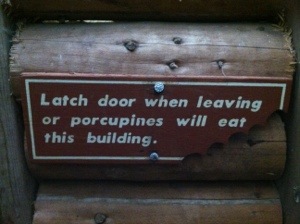 One thought on “Somewhere in the Wilderness”