Monday, September 2….When Molar Man said he would like to stick with our plans to summit Katahdin on Labor Day, regardless of the weather, I felt just a bit concerned with our decision. With a 90% chance of rain by early afternoon, I seriously wondered if we were doing the smart thing. I had been somewhat apprehensive and a little anxious about the climb for the past week. Due to the potential for a nasty day, my anxiety increased. So with almost a certainty of no views, Molar Man and I signed the trailhead at 6:30 before taking our first steps toward the summit of Katahdin and the end of my thru hike of the Appalachian Trail.

For about the first mile the agreeable trail only minimally elevated as it traversed over more roots, dirt, and small rocks up to Katahdin Stream Falls. From there the more severe climb began. Like some of the climbs in the Whites, portions of trail required us to use our hands. When possible I chose to take advantage of the erosion areas to navigate around more challenging rock slabs. Eventually, however, rock scrambling was necessitated. As the wind speed increased and the cloud cover expanded, we hit the most severe section of the ascent.

For about a mile the climb became dangerous and unnerving, especially considering that a light rain had begun and the temperature was dropping steadily. As Molar Man and I neared the final few hundred feet of the 2000 foot ascent to the Tableland, he stopped, stooping down behind a boulder to shield himself from the sideways rain and wind. Surprisingly he asked, “Do you want to turn around here?” When I asked, “Why?,” Molar Man stated, “It’s not going to get any better.” For a brief moment I wondered if we were in danger due to the elements. If we turned around I would either have to try to summit another day or end my hike without seeing the summit. Neither choice appealed to me. “Let’s keep going,” I replied.

When we returned to our full posture the wind almost knocked us over. So with Molar Man leading the way we continued the climb. While pulling ourselves up onto and over large rocks, we sporadically caught glimpses of cloud encircled pieces of surrounding ledges. In a way I think not seeing all the exposed areas may have been advantageous. A part of me was disappointed that we were almost entirely engulfed in clouds. Another sighed relief that the precipitous ledges remained invisible. We just followed the white blazed boulders up the mountain. By the time we got to the Tableland the winds made it almost impossible to remain erect. I kept Molar Man in sight as I hunched over to keep from being blown off of the mountain.

That last mile past Thoreau Spring proved “foggy” in more ways than one. I had limited visibility and my mind was clouded with interspersed thoughts of finishing the trail and hypothermia. So many thoughts were running through my mind that the summit actually came upon me before I expected it. Due to the adverse conditions I could not see the summit sign until I was practically on top of it. The entire hike I have expected to get emotional at the summit. I didn’t. I simply wanted to get my picture taken and get off that mountain. Thankfully, there was one other hiker there. Ben, who said he had hiked up on another trail, took shots for Molar Man and me. It was exactly 10:00 at the summit.

Because of the deteriorating weather we did not linger. In less than five minutes we began the descent. About a half mile down we met three other hikers that we did not recognize. Later we met a young man and lady. That was it. Katahdin was a lonely place on this bleak day. We needed to hike safely, but we also needed to hike quickly to get back below treeline. Twice on the Tableland the wind literally knocked me over. I walked in a crouched position to maintain my equilibrium. It was beyond challenging to navigate the steep ledges, now wet, in what had to be 70 to 80 MPH winds.

Rain pelted us from above and wind blew us from behind. Through it all my hiking buddy and I just kept moving, knowing that we had to get down that mountain. Getting past the Tableland, Molar Man paused briefly behind a boulder. He was shivering. We were both drenched and cold. There was no way to eat our lunch, so we didn’t even try. We just kept moving, sliding down, easing down, painstakingly inching our way down the wet boulders. My gloves helped on the rebar even though they were also soaked. I just kept reminding myself of all those who were praying for me and a calming sense remained with me through the storm.

Time passed rapidly, or did it stand still, as we just continued to make our way down the wet boulders. Finally we got back to treeline and then below. The terrain still demanded our attention; however, wind became less of an issue. Because of the steady cold rain and wet rocks, I had to be careful not to slip. Molar Man and I stayed together as we moved closer and closer to Katahdin Stream and only one mile to go. When we did reach the level section of trail standing water covered large segments. Since our feet were already soaked, we just sloshed through the puddles.

With each step I felt a sense of relief, knowing that we were so near to warmth and safety. Then what we were about as anxious to see as the sign on Katahdin appeared. We stood before the trailhead register where we had stood seven and one-half hours earlier. Molar Man’s glasses were so fogged over that he could not see to sign out. I signed 2:00 for both of us. We had safely made it to the summit and back down. I could finally feel good about having thru hiked the Appalachian Trail.

Within minutes Molar Man and I were inside the Volvo, getting warm and headed back to Millinocket. We met my family on the way out of the park. I had gotten off the mountain so quickly that their arrival was late. It didn’t matter. When I saw Linda, Lisa, Brent, and Lori, all was well. After a hot shower we all dined at the AT Cafe before my family and I drove to Bangor. Later in the evening Rachel arrived which made the end of the day even more special. So surrounded by those I love I said a prayer of thanksgiving for all that had happened during my five months and ten days on the Appalachian Trail. 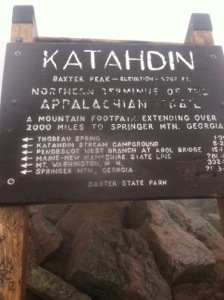 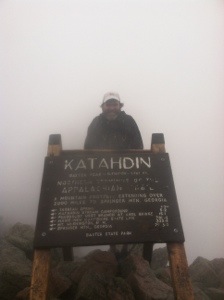