Happy Easter! Despite another night of heavy rain and a tent with a small bit of water inside, today started on an amazingly positive note. For the past 22 years the “Omelet Angels” have served Easter morning breakfast to thru hikers at Deep Gap and then moved on up the trail to offer lunch at Rock Gap. Without accepting donations, the group offers up massive omelets prepared as each hiker orders. The only requirement was that we had to fill out a menu form before being served. I selected cheese, ham, and peppers. I also added three strips of bacon, a fresh fruit cup, and a piece of friendship bread. The omelets were so huge that we were told that only four or five hikers had been able to polish off more than one over the years. With what was promised to be over 3000 calories to begin my day, I was sure to hike strong again. And hike strong I did, compiling a 17.1 mile day into Long Branch shelter shortly before 6:00, after having begun the hike at 10:10.

For much of today I hiked in the rain. After a fairly difficult accent up Standing Indian Mountain, I walked in the clouds with no visible views on this Resurrection Sunday. I saw no other thru hikers either throughout the morning and early afternoon. When I took a break at Beech Gap I did meet Dave and Robert, from Flowery Branch, GA, who were out for a section hike. When I reached Carter Gap shelter, I stopped for a break. The sandwich that the Omelet Angels has packed for me enabled me to get a second wind for the late afternoon pursuit of the shelter. It’s All Small Stuff, a 66 year old thru hiker from Dallas, had also stopped for a break. He has been on the trail since March 7.

As the day wore on, the rain increased. By the time I reached the shelter, rain had soaked my jacket. My trail runners were also a muddy mess. The most challenging part of the entire hike thus far was the climb up Albert Mountain in the rain. The slippery protruding rock faces presented a painstakingly slow accent. A couple of times I had to lay my hiking poles on a ledge above my head and use my hands to rock scramble up the precipice. About half way up I noticed another hiker above me. When I reached the apex of the mountain and the Albert Mountain fire tower, I met Danny, a young man from Lexington, KY who was trying to make it all the way to Wallace Gap and a shuttle to Franklin. Danny hikes at a quick pace, so I slogged through the mud on his foot heels all the way to the blue blazed trail to the shelter.

As I approached the Long Branch shelter, I greeted the group with, “I hope there’s one more spot for an old man.” I’m finding my age is an asset around this fine group of young folks I’ve encountered. Since my tent was wet, I had to have a shelter. Fortunately, there were two places available. I chose the bottom level. The Raisin Bran Kid arrived shortly after I did and got the last spot. After getting my sleeping pad and bag ready I finished my sandwich and chips. Then I chatted with some of the other hikers until sundown when everyone turned in for the night.

Maddy and Whiskers were there as was Blissful. The others were all new to me, having begun their hikes before I did. It was great meeting and sharing hiker info with El Gato, Two Sticks, Storytime, and Hammy. I couldn’t have asked for better shelter mates for the night. As I settled into my sleeping bag rain began to fall. Its patter on the tin roof brought back memories of a “side room” on my grandmother’s farmhouse, a place where Don and I enjoyed many special family memories. So I ended my Easter Sunday among strangers who had quickly become friends, listening to the patter of raindrops on a tin roof, in a shelter, on the Appalachian Trail. 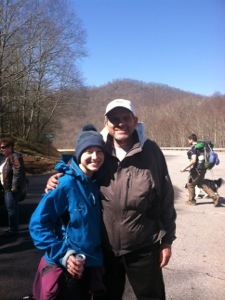