At 8:30 Bill Van Horn (Day-glow) drove up in front of the Microtel in Franklin to shuttle Jolly, Highlighter, and me back to the trail at Winding Stair Gap. Bill made one stop on the way, in order to organize a group who was going our to do trail maintenance. The group volunteers to work on the AT around the Franklin area every Wednesday.

When we arrived at Winding Stair Gap, there were three hikers awaiting a shuttle into Franklin. When one introduced himself as Bass, I knew this was going to be a great day. There wasn’t anything my brother Don enjoyed more than bass fishing. I briefly told Bass about Don before beginning the climb out of the gap. I quickly hiked ahead of Jolly and Highlighter, walking across a small bridge over a stream with rushing water cascading down the rocks.

For most of the morning the miles zipped by. I only saw one other thru hiker, Sanka from Columbus, Ohio. On Siler Bald, while taking a break, a shirtless Grimch amd his hiking buddy Kermit hiked past after briefly stopping to say hello. Both had also passed me just before Deep Gap on Saturday. On the descent from the bald, I met a group of about a half dozen day hikers who were headed up to the bald for the views. They were from various cities and belonged to an organization called “road scholars.”

Stopping for a break at 11:45, I checked my guide to realize I had covered in excess of 5 miles in a little over two hours. A few minutes later I came across a woman doing trail maintenance. Nancy Phillips is originally from Eufaula, Alabama, a city Don and I often traveled through with our parents, as children, to visit our grandparents in Ozark. Don also spent many hours in his bass boat on Lake Eufaula. Nancy walked up the trail with me to where her husband and other trail maintainers had taken a break for lunch.

As the day wore on, I encountered a plethora of thru hikers. Among them were Snowman and Riverdog, who are completing a southbound thru hike they began in August. Taking a break around Christmas, they had recently returned to the trail to finish their hike. I also met the father and son team of Cookie and Dash. Just before reaching Wayah tower, I ran into Chris from Birmingham (now Slim Jim) and Jonah, a hiker from Tallahassee, who just finished high school last year. There were many other day hikers at the tower as well. With 360 panoramic views, Wayah tower is a popular tourist destination in the area, which is accessible by car from a gravel forest road.

While I was eating a sandwich, Jolly, my new British friend, arrived at the tower. Asking how much farther I planned to hike today, I told him of my reservation at the Aquone hostel. When he called Maggie, the owner and a fellow Brit, she told him that there was one bunk left. So Jolly and I hiked together to Burningtown Gap to complete a 14.6 mile day. Shortly after calling the hostel to let them know we were at the gap. Maggie’s husband Steve arrived to drive us to the Aquone. For the approximately three mile drive down the mountain, I felt more like I was in a Manhattan taxi. At breakneck speeds, the former British Green Beret exhibited flawless driving skills as he navigated the narrow gravelly road. And as he drove, he and Jolly compared their UK pasts. Steve hails from Manchester. A United fan, he said his family is split between the two clubs who are perennial contenders in the Premier League.

After arriving at the hostel, Steve showed us around and told us that dinner was at 5:30. The building, which Steve completely constructed by himself, is unbelievably beautiful. He also made some of the furniture in the hostel as well.

Already there were Maddy (now Rocket) and Whiskers, Puffy, Bojangles, Walker, Captain Dan, Tie Dye, Postman and Oxy. Tie Dye, who currently lives in the Park City, Utah area with her husband, has read my journal. Puffy, a 26 year old former high cross country runner, had heard about my reason for hiking and sincerely offered his admiration for my pursuit.

After dinner we all returned to the common room for some hiker banter and viewing of the weather channel. Since most of us plan to hit the Smokies on Sunday, we are closely watching weather patterns for the next week. Even though cold rain is forecast for tomorrow, the next five days after appear to be great for hiking. When I noticed a scrabble game under the TV and asked if anyone wanted to play, Rocket, Whiskers, and Tie Dye gladly accepted the invitation. Once again I’ve found myself among the finest of company after a day of exhilarating hiking and spectacular views as I make my way northward on the Appalachian Trail, 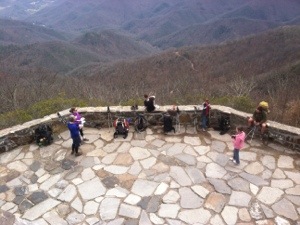 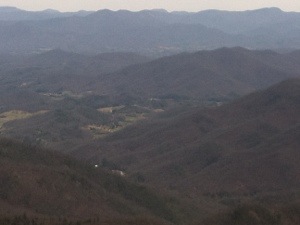 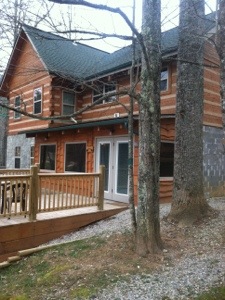 One thought on “Winding Stair Gap to Burningtown Gap”