The town of Marion provides a shuttle bus “up the mountain” three times a day for the meager fee of 50 cents. So Not Yet, Sunshine, and I were waiting outside the Econo Lodge for the ride back to the trail at 9:00. When we arrived at the Mt. Rogers Visitor Center, several hikers, who had stayed at the Partnership Shelter last night, boarded for town. Some didn’t have their packs, expecting to simply re-supply and then return to the trail. Outfitter, In Progress, and Bubblegum were among them. We greeted each other and then I crossed the road for the trail. At the time I didn’t know it, but these would be the only hikers I would see for the remainder of the day.

The hike began with several minor ups and downs before leveling off at the crest of Glade Mountain. By far the best scenery of the day, I rested for a few minutes on a rock just enjoying the view. Trying to drink more today in preparation for the warmer days which are right around the corner, I downed about ten ounces of water with some food as I relaxed. Then I hiked at a good pace for the next two hours.

I did take another break at the Chatfield Shelter. Something I have not been doing regularly is signing the logs at the shelters. Today, however, I wrote a little, and signed my trail name along with “Don loved the woods.” I also read entries from the past few days to see how many hikers that I knew had stopped by this shelter. Titan had been there the day before me. The only other hiker that I recognized was Tugboat.

The hike was on the mundane side until the final few miles. About three miles before reaching VA 683, I noticed a marker that said, “1890 Farm.” I took the side trail for about one hundred yards to a well-preserved farm from the late 19th century. As I walked around the old homestead I thought about how much my brother would have liked this site. It reminded me in many ways of the home of our grandparents in rural Dale County, AL. Don would have really been impressed with the old farm equipment which included a plow like our granddaddy used when we were kids. I took more pics at the farm than I did in the woods today.

After walking the side trail back to the AT, I moved quickly once again to reach the road a little after 2:00. Just before VA 729 I came upon an old one room schoolhouse. Etched in the weathered wood above the door appeared “Lindamood School 1894. History on the trail continues to fascinate me. For a couple of minutes I paused to think of how it must have been in the area almost 120 years ago. Children from the farm had probably attended the school. I wondered if any of their descendants still live in the community.

The trail wound through a grassy field for most of the final two miles to VA 683, US 11, I-81 in Atkins, VA. When I arrived at the road I finally saw one solitary hiker walking toward me. PePaw is northbound, but was headed to the Relax Inn after a meal at the Farm. Many hikers stay at the small local motel just a few feet off the trail. While I was talking with PePaw, Molar Man and Diane drove up to give me a ride back to Marion. After a hot shower I walked down to the KFC for some more chicken and sat with Bubblegum as he literally devoured the buffet. Bubblegum, from near Richmond, is one year older than I am. He is a strong hiker who I’ve seem on the trail a few times.

The mind goes everywhere during five hours of solitary walking. How often in the real world do we have the opportunity to spend this much uninterrupted time with ourselves? At times throughout the day I sang silently my favorite Bee Gees tune in recognition of the new month. “When I was small and Christmas trees were tall, we used to love while others used to play…….now we are tall and Christmas trees are small, and you don’t ask the time of day, but you and I, our love will never die, but guess we’ll cry, come First of May.” 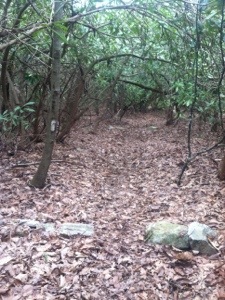 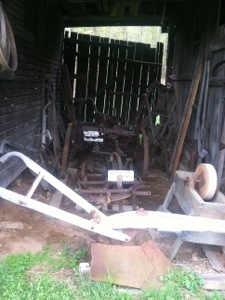