Rain, rain, rain, rain! For the better part of the day I slogged through a steady drizzle of varying degrees. A continuous, somewhat cold wind added to my discomfort. With only a short 10.4 mile hike scheduled, and a motel room waiting at its conclusion, I persevered and managed to “remain vertical” throughout the day. Considering the extremely muddy downhill section descending into Pearisburg, that in itself was quite an accomplishment.

The day began nicely around the breakfast table at the Woods Hole Hostel. Like last night, Neville requested that we join hands and state that for which we are thankful. I said that I was thankful for my brother Don’s life. The same group of hikers, plus Owl and Zag, were served scrambled eggs with sausage and kale, cantaloupe, peach crisp with homemade yogurt, and fresh baked bread. A special coffee blend was also available. So much for trail food. I’ll take this kind of breakfast on any day.

Several hikers were choosing to forgo hiking today due to the poor weather conditions. In fact, when I walked away from the hostel, in a light sprinkle, no one else had left the building. The half mile walk up the gravel road leading to the trail set the mood for the entire day. I was wet before I stepped foot on the AT. Still the ascent from Sugar Run Rd. didn’t pose any serious obstacles despite numerous slippery rock slabs. Nevertheless I made good time even in the rain. And like yesterday, I saw two white tail deer in the first mile. It was disappointing, however, that all the views listed in my AT Guide were fogged in. I missed the view to the west at Angel’s Rest. For consolation I reminded myself of the spectacular vistas I had already been fortunate to have good weather days to enjoy.

With about four miles left in the hike I came across Snailmale, a section hiker from north Georgia who had stopped for a break. A little while later he caught me, so we hiked together into Pearisburg. Snailmale had been out for a 100 mile section hike which ended today. A postman in Chattanooga for thirty years, he has been using vacation time to hike the AT for a while, getting all the way from Springer to Pearisburg. A seminary graduate as well, Snailmale shared his faith with me as we hiked. I, in turn, talked about Don’s. Finishing the day in such fashion minimized the discomfort from the relentless rain.

When we reached the outskirts of town, we made a tactical error by not conferring with our guides. Not realizing that he had parked his truck just down Lane St., we continued the hike over the New River. Only then did we realize that we were walking away for Pearisburg. Backtracking across the river, we located Snailmale’s truck in a grassy lot just up the road from the trail. My new friend then drove me to my motel before beginning his homeward journey.

So tonight I’m in the Plaza Motel, not to be confused with a hotel by the same name at Central Park South and 5th Ave. in Manhattan. The amenities may not be the same, but hey, it’s an Appalachian Trail town. And considering the six hour walk in the rain, I couldn’t be more comfortable. I’m dry, I’ve had a meal, I’ll probably have another a little later, and the Braves are on TV tonight. Even on a wet day, all is good along the Appalachian Trail. 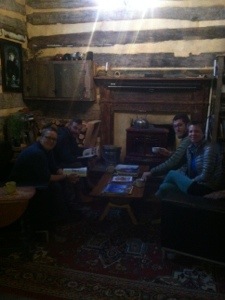 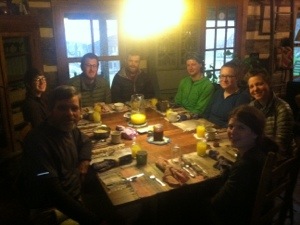