Sunday, May 5: Woods Hole, an 1880’s chestnut-log cabin, located half a mile off the trail down Sugar Run Rd., has welcomed hikers since 1986. Originally opened by Roy and Tillie Wood, their granddaughter Neville and her husband Michael are now the hostel’s proprietors. As I made my way toward the cabin, a light mist dampened my jacket. I was thankful that the threatening skies had not opened up earlier. Neville greeted me with a smile on the front porch. From there I was taken upstairs to select a room. After a little deliberation, I chose to splurge somewhat on the only single room available. When the hard rain arrived later in the afternoon, I was even more grateful for my cozy accommodations.

Earlier this morning I had been shuttled back to the trail by my now friend, Bubba. He had been kind enough to drop me by Subway first so that I could have breakfast while he drove two other hikers, Not Yet and Sunshine, back to the trailhead at US 52. By the time he returned I was ready for a planned short 13.9 mile day to the hostel. On this overcast, cool morning, I said my final thank you to my shuttler of the last three days before he drove away.

Within a few minutes of beginning the hike, I heard rustling leaves to my left. Two white tail deer peered in my direction. Pausing to take a picture, I thought of Don and the many deer that had walked onto his property. He often set a motion activated camera to catch their actions. For a minute or so, the deer and I stared at each other until I finally turned my attention to the trail.

Like so many other days, today’s hike started with a climb that led to a side trail to Dismal Falls. Since I wanted to arrive at the hostel as early as possible, I chose to forgo the falls. From there the trail leveled off over the next six miles. For a while it paralleled a stream, necessitating several water crossings. Some required rock skipping while others had footbridges. There were no less than six stream crossings during a one-mile stretch. Still I managed to stay dry and vertical.

When I reached the Wapiti Shelter, I stopped for lunch and signed the register. From there the trail ascended over the next three miles, culminating with a beautiful view to the east. During the climb I felt a little sluggish; however, overall I made good time throughout the day. Just after Big Horse Gap signs of a recent controlled burn altered the landscape. For about a one mile segment, charred remains of foliage and trees were visible. The burning smell still filled the air.

Up until late afternoon I had seen only two female southbound hikers. Then about a half mile before my turn, Torch passed by at a brisk pace. Reaching Sugar Run Rd. at 3:00, I took the turn toward the hostel. At the bottom of the gravel road I met three hikers who were waiting for a ride to Pearisburg. Cinnamon is the fourth hiker that I have met who is hiking in Brooks Cascadias.

Tonight was another special one. I enjoyed a communal meal of homemade pizza, bread, grilled cheese, and tomato soup, all prepared by Neville. Other hikers dining with me were Rainbow Braid, Sugar Bomb, Finder, and Novi. Before we ate, Neville asked that we join hands, tell our trail names, and share something for which we are thankful. I said I was grateful for the ability to walk and for my family. Each day I give thanks for both as I walk solitarily toward Maine. All continues to be good on the Appalachian trail. 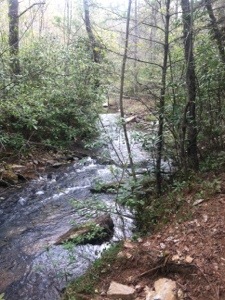 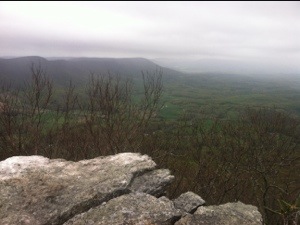 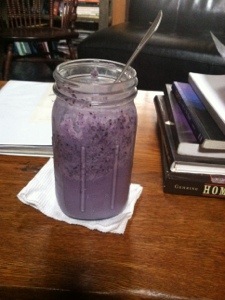 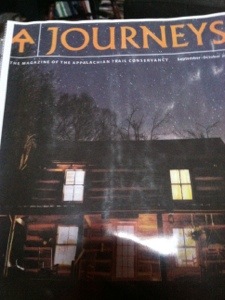