For the third consecutive day, I got wet. Really wet! I was again soaked at the end of a modest 13.1 mile day. My pack is wet, my rain gear is wet, all my clothes are wet…..I suppose it’s clear by now that I’m not a happy hiker. Well, actually I couldn’t be more content. I’ve covered 45.2 miles over those last three days, and somehow I’ve managed to stay afoot while doing it. Plus, the forecast for tomorrow is sunny with a high of 75, which hopefully will help dry out the, saturated beyond recognition in places, trail.

Another reason that I’m feeling so good is that for the first time since I moved on up the trail from Molar Man, I had a steady hiking partner all day. Speck, a cardiology RN from Atlanta, shared the shuttle back to the trail head with me this morning. A strong hiker of about my pace, we seemed to compliment each other well over the sloppy terrain. Also a runner and mountain biker, Speck has section hiked the AT from Springer up to where we concluded our hike today. Her plans are to hike four days with her daughter-in-law beginning on Friday and then to finish up this section in Waynesboro in a couple of weeks.

Today’s hike began with a climb of about 1000 feet to Bailey Gap Shelter. Several rocky areas necessitated that we hike with diligence for a couple of miles. Just like the past two days, no views were visible. At times the trail transformed into a stream of moving water. Keeping shoes and socks dry proved impossible. I’ve just come to accept the inevitability of uncomfortable conditions when they occur.

Unlike yesterday, only one water crossing presented a bit of an unnerving situation. Speck handled the walk across a log bridge easily. I, however, inched my way across, trying not to look at the raging waters underneath. Every time I heard rushing waters in the distance, I feared a raging stream without a bridge. It’s doubtful that the water will subside over the next twenty-four hours, so I could have more such obstacles to deal with tomorrow. There’s no point in worrying about the inevitable.

After passing Lone Pine Peak, the trail descended almost 2000 feet. With a quagmire to deal with, the downward hike required some slow, tedious maneuvering. We met two brother section hikers, Electric from Boston and Yoda from Columbus, Ohio. Yoda requested our permission to film a 30 second video which he plans to post on YouTube when he finishes his hike. He has been videoing hikers for about 100 miles. I told both about my hike in memory of Don. Electric said he looked forward to checking out my website. We also met another southbound section hiker whose name I failed to get.

When Speck and I reached the War Spur Shelter, we took a short break. Two hikers were sitting out the rain. Then just past the footbridge over Johns Creek, the trail again began to ascend. With more wet rock slabs to handle, we slowed slightly on our way to Rocky Gap where Don the shuttler was waiting to transport us back to Pearisburg. An extremely affable gentleman, Don insisted on stopping at Wendy’s so that we could get a late lunch before dropping us at the motel.

For the first time in several days I’ve gotten in a good hike, showered, had a meal, and written this journal entry, and it’s not even 5:00. I’m about to go do a little shopping and then have dinner at a Mexican restaurant across the street. And as I look outside I notice that it has stopped raining. Despite the rain and messy trail conditions, good company and thoughts of my brother made for another joyous day on the Appalachian Trail. 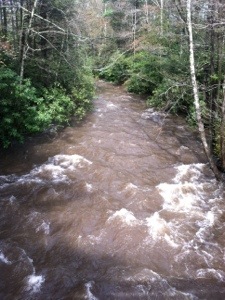 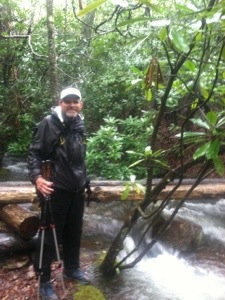