Thursday, May 9: Blue skies and bright sunshine prevailed on a perfect hiking day in every respect. Even with a couple of precarious stream crossings on slanted wet rocks, nothing could spoil the picture-like views or detract from the pleasant company. From pasture crossings to rock hopping, the trail offered great variety throughout the morning and the afternoon alike. The 16.8 mile day raced by, leaving me happily tired with my feet in a stream at its end.

Like the last two mornings, my day began at the Pearisburg Hardee’s. Speck and I walked over for breakfast at 6:20. For the third time I had the pleasure of chatting with Fred Austin and his son Steve. Since the post office had already closed when I needed to buy stamps yesterday, I asked Fred if he would do me a favor by putting something in the mail for me. He graciously agreed. I feel honored to have made the acquaintance of these two gentlemen while in Pearisburg.

Right on schedule, shuttler Don arrived at 7:00 to drive Speck and me back to the trail. We were immediately greeted with a straight up climb from Rocky Gap. Then the trail leveled to Kelly Knob which afforded us our first view in what seems like a week. After passing the Laurel Creek Shelter, we encountered the first of two challenging stream crossings over wet rocks. The still swollen creeks were not as high as yesterday; however, rocks were still submerged. After watching Speck cross the first stream with relative ease, I chose a different approach which led to a wet shoe.

We then made our way over a pasture which provided us with beautiful views in all directions. Puffy while clouds dotted one of the bluest skies I have ever seen. A footbridge at Sinking Creek was a welcome sight. Then a little over a mile later we arrived at the Keiffer Oak, the largest oak tree on the AT in the south, estimated to be over 300 years old. Carpenter and Little Seed, two northbound hikers that we had seen yesterday, were stopped for photos. We alternated taking others’ pictures. After they had moved on, Speck and I took off our packs for a rest.

When we headed on up the trail, a section of rocky, slanted slabs awaited us. We both were thankful that the sun was out and that the slabs were dry. Skipping, hopping, and climbing from one slab to the next made for a somewhat unnerving, yet fun segment of trail. Breathtaking views to the east enhanced the hike. At one time Speck commented that the rocks were exhilarating. I agreed. Beginning to feel more like a seasoned hiker, it was all fun.

After passing the Niday Shelter and walking across one final stream for the day, Speck and I arrived at Craig Creek Rd. at 4:03. Speck’s daughter-in-law, Jodi, had not gotten there yet. So while we waited, Speck and I took off our shoes and soaked our feet in the ice cold water. When Jodi was over an hour late, I decided to walk up the road in hopes of finding a home with a phone since there was no cell service in the area. Because a ferocious sounding dog guarded the first home I saw, I kept walking. A few minutes later, a friendly man in a pick-up stopped to ask if I needed help. He owned the home with the dog and had seen me walk by. Again a trail angel came to the rescue. Jeff Bacon not only let me use his phone to call Jodi, but he also drove me back to where Speck was waiting. Shortly thereafter Jodi drove up and we were on our way to Daleville. The ladies dropped me by my motel before heading to theirs.

After getting cleaned up, I joined Speck and Jodi for dinner at a Cracker Barrel. When the subject of trail names came up, I suggested Lost Girl for Jodi. We all laughed. She plans to join Speck for a four day section hike, her first on the AT, beginning tomorrow. For me, it will be back to the woods alone to deal with Dragon’s Tooth and perhaps a thunder shower as I keep heading north on the Appalachian Trail. 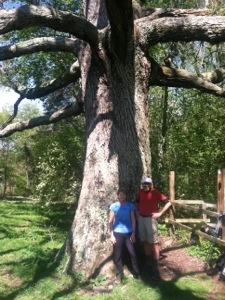 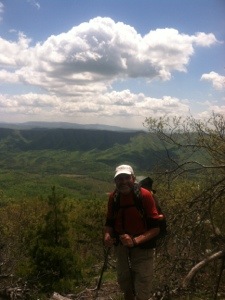 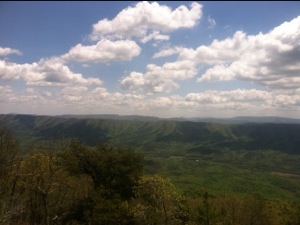 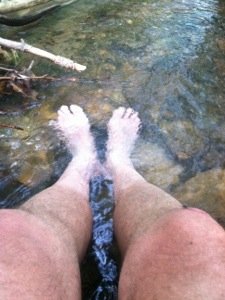 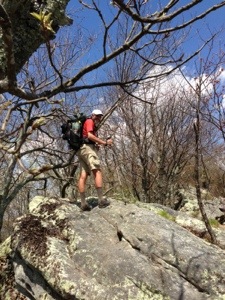 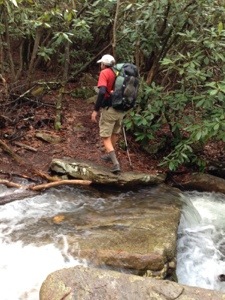 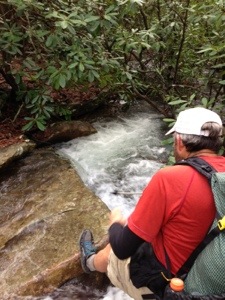 One thought on “Rocky Gap to Craig Creek Rd.”