Some hikers say the reason they don’t keep a journal is because they are too tired to write at the end of the day. Today I understand what they are saying. I’m tired! in fact, I’m close to exhaustion after a 15.4 mile day which started with a long climb of almost 1500 feet over two and one-half miles and ended with a technical descent of the trail down from Dragon’s Tooth. Both challenged my hiking skills, but in very different ways.

Like many other days, I used a shuttler to get back to the trail today. Actually Speck arranged for Homer to drive us. A trail and shelter maintainer in the Daleville area, Homer exemplifies all that is good about the Appalachian Trail. Along with his wife and two youngest children, Homer thru hiked the AT a few years back. When I asked him about the difficulty of the section around Dragon’s Tooth, he said he had come down it carrying a chain saw. Now at 71, Homer takes a very active role in maintaining the trail. When he picked me up this afternoon, Homer told me that he had cut grass near the trail and run five miles earlier today. Tonight he was playing bridge.

After returning to the trail at Craig Creek Rd., I hiked on ahead of Speck and Jodi since they were planning a shorter day. Because we didn’t shuttle out until 11:30, I hoped to hike quickly so that I could get to Dragon’s Tooth before the predicted afternoon thunderstorms arrived. After that already mentioned initial ascent up Brush Mountain, the trail very slightly descended for four miles to Trout Creek. During the descent, a short blue blazed trail led to the Audie Murphy Monument. The monument was erected near the site where Murphy died in a plane crash.
Since two wooden benches were available, I relaxed on one to eat a sandwich. Scarecrow, who I hadn’t seen in over a week, occupied the other.

For much of the day the trail was friendly. Then came Cove Mountain and a variety of rock structures to climb over. Just before the blue-blazed trail to Dragon’s Tooth came into sight, I met for the first time Howdy Man, a recent college graduate with a degree in Mechanical Engineering. Howdy started from Springer on April 1 and uses some rather unorthodox hiking strategies. For one, he’s carrying a very light tarp which he only uses if it’s raining. On most nights Howdy said he cowboy camps. That is a hiking term for sleeping under the stars.

As we approached Dragon’s Tooth, a swarm of some kind of black fly decided to harass me. Swatting flies while going over the rocky trail was not what I had expected. But neither was the trail. I had become so concerned with the difficulty of the rock ledge section that I had failed to appreciate a couple of beautiful views. This portion of trail provides hikers with the opportunity to do a little rock scrambling. Even though I handled the segment well, I was still glad Howdy Man was around. Although I didn’t really need his help, he stood beneath me on some of the more difficult parts.

Just as we began our final mile toward the road, the rain, accompanies by thunder, began to fall. Howdy Man found a suitable spot and stopped to pitch his tarp. I hiked on at a faster pace, hoping that Homer would be there early. As I got within a few minutes of the road I spotted his car with the lights on. Harder rain began to fall just as I entered the car. Homer drove me back to Daleville before his bridge game tonight.

Tomorrow I’ve scheduled a rest day. I thought about waiting a few more days; however, my body is telling me it needs a break. With showers again in the forecast, it seems like a perfect day to take a day off. The first of next week is showing sunshine, so I hope I’ll have great hiking weather as I make my way toward Waynesboro, the next major town on the Appalachian Trail. 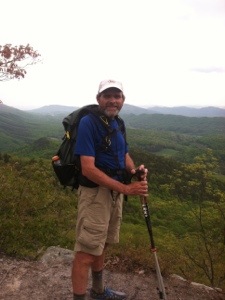 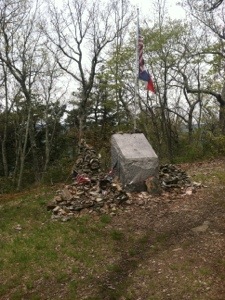 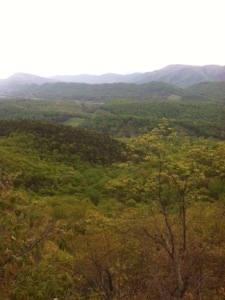 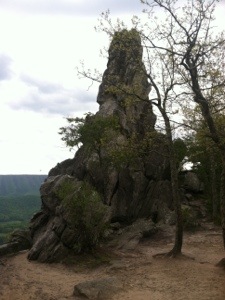 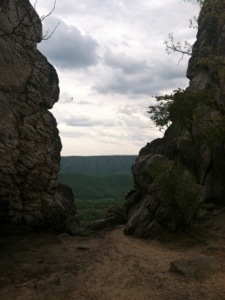 One thought on “Craig Creek Rd. to Newport Rd.”