There is a section of the Appalachian Trail in northern Virginia that is referred to as the roller coaster. In a way every day on the AT can metaphorically qualify as a roller coaster. From the physical unending ups and downs to the emotional ebbs and flows, each day comes with its set of challenges. On some days I awake and think, “Do I have to hike again today?” Then when I take that first step on the trail, all is well with my world. On other days I wake up raring to go only to suffer a case of the doldrums within the first couple of miles. Like in life, there is no certainty to how a day will turn out on the trail. I sometimes find myself identifying with Gulliver in Brobdingnag while at others I seem to be Odysseus looking for Ithaca.

Today I got the opportunity to again hike with Speck, along with Lost Girl and Little Seed. We departed from Daleville at 7:30 with a planned 16.1 mile day, which would take us to Harvey’s Knob Overlook. A rather mundane trail today, no views were evident until we reached the first of three crossings of the Blue Ridge Parkway. Such crossings will continue regularly through the Shenandoah’s. Other than a couple of stiles and four or five short stream crossings over rocks, nothing really stood out.

We did meet two hikers from New Jersey who have section hiked over 1700 miles. El Gato and Calves related some of their hike to us during one of our breaks. I at first thought Calves had said his trail name was Cabs even though he was pointing to his lower leg when he told me. It took me a while to understanding what the man from Jersey was saying. Both seem like great guys. Considering where their section is scheduled to end, there’s a good chance I will see them again tomorrow.

When the three ladies and I reached the Wilson Creek Shelter we took a lunch break. A couple of day hikers were there with their dog. The pooch didn’t seem very friendly, so I failed to get his name. As we relaxed, El Gato and Calves stopped by. They were headed to the next shelter for the night. Also passing by was Howdy Man. It was good to see my young friend from Dragon Tooth again. With a somewhat cold breeze beginning to make us a little uncomfortable, we finished our lunch and then resumed the hike.

At the second crossing of the BRP two folks had set up chairs and were providing some trail magic. Footnote, a former thru hiker, and his wife Pat had quite the spread. From fruit and vegetables to cookies, pound cake, and milk, it was all good. The popcorn, however, seemed to be the favorite. Footnote also told us about his recent completion of a hike of the entire Blue Ridge Parkway. It was nice to spend a little while chatting with Footnote.

When our group reached Harvey’s Knob Overlook, Homer was waiting for one final shuttle back to Daleville. Very tired from the hike and poor sleep last night, I briefly dozed on the ride back into town. Now I’ve got to make the walk down to Kroger for some groceries because tomorrow it’s back to the woods for two nights. Even though the views were minimal and the trail more of the same, again it was a good day to have nothing to do but walk. I continue to think about my brother Don often as the journey continues northward on the Appalachian Trail. 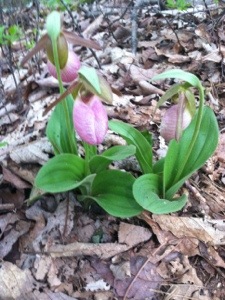 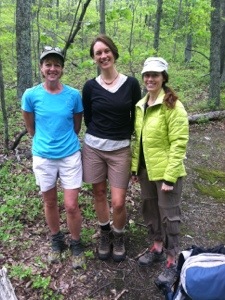