As another month comes to an end, I celebrate my 70th day on the Appalachian Trail. In many ways it feels like 70 weeks. Sometimes I find myself trying to remember various aspects of my home. Strangely, the longer I’m away the more vague things become. I best be careful for fear of contracting that dreaded disease of all thru hikers…homesickness. It has forced some off the trail already. It always seems to be lurking around the next hard climb or within a casual conversation among other hikers.

Today was a day of firsts. I’ll get back to that later because they occurred near the end of the day. This morning the trail offered up several panoramic views between Skyland and the Pinnacle. Early in the day I came across a group of trail maintainers from the Potomac Appalachian Club. When a worker who identified himself as Sisu asked my trail name and I said Don’s Brother, he said he had been following my journal. Sisu also asked me to tell the others about Don. They all ceased their work as I briefly talked about my brother.

A little later I met a lovely couple from London. John and Ros said they were out for a walk, not a hike. Just a short while later I had my second Blissful sighting in the past week. Having first met the former thru hiker in Georgia, I knew that she had planned to do some work as a ridge runner this summer. On Monday I saw her just north of Waynesboro. Today I saw her again. I wouldn’t see another hiker until very late in the day.

When I reached Thornton’s Gap I walked down to the restroom area to fill my water bottles from an available fountain. Bison and Barking Spider were going through a re-supply box trying to decide what to keep and what to leave for other hikers. They had way too much to carry. As they rummaged through the box, I ate my ham sandwich and peanut butter cups. They were still sorting items when I wished them well and headed back to the trail. Since I feared that the heat would drain my energy, I promised myself that I would drink every 20 minutes.

So as I hiked through the afternoon I had the trail to myself until about two miles before Elkwallow Gap. Hiking at a brisk pace I suddenly came to an abrupt halt when I heard a distinct rattling sound. For the first time ever when hiking anywhere, I came face to face with about a five foot long rattlesnake. After snapping a couple of pictures, I then had to figure out how to continue up the trail. Not really knowing the proper protocol, I first tossed a rock in its direction. Nothing. So I tossed another which hit the snake. Still no movement. My next idea was to try to bushwhack around the snake. When he began to coil and rattle again, I nixed that idea. So there I was in a standoff with a rattlesnake. Fortunately he quickly decided to slither back into the underbrush. When he was at a safe distance, I gingerly walked past and then quickly picked up my pace.

The rattlesnake, however, was not the only “first” today. Within about a half mile of concluding my hike I heard a loud noise just off the trail. When I looked to my right, a large turkey was strutting back and forth, obviously irritated about my proximity to his spot. Realizing that trying to get close enough for a good picture was not a good idea, I moved on as he continued to display his distress. Oddly enough, this was almost the same place I had seen a mama bear and her two cubs when I section hiked the Shenandoah’s in 2006.

When I finally reached the Elkwallow Wayside, a little unnerved I must admit, I ran into the first thru hikers I had seen in the past two days. Pacemaker and Runner-up were resting at a picnic table. We chatted until Mike Evans, the owner of the Terrapin Station Front Royal Hostel, arrived for my shuttle. It was good to get re-acquainted with the Grateful Greenpeace Guy. He told me that only one other hiker, Pilgrim, was staying with him tonight. A thru hiker from California, Pilgrim also has a journal going on trailjournals.

After I had the opportunity to do some laundry for the first time since Buena Vista, Mike drove Pilgrim and me into Front Royal for a meal at a Mexican restaurant and a grocery store stop. He carries out this routine every day during hiker season. My routine is the hike. But as I look back on my day of “firsts,” I’m definitely hoping that there won’t be any seconds tomorrow, or any day for that matter, as the journey continues on the Appalachian Trail. 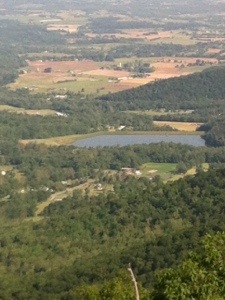 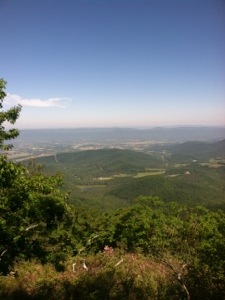