For the fifth consecutive day I hiked alone. And again I saw no thru hikers on the trail. At times it seems like I’m the only one headed north even though I know there are still many others. I’m just not finding myself around them. I did pass two northbound section hikers, Bloodhound from Raleigh and Poncho who lives in Puerto Rico. Poncho was finishing the complete trail in sections in Front Royal today. I asked him if he had champagne in his pack. He said he didn’t but that he was sure he could find some way to mark the occasion.

With another mundane trail and a very hot temperature, I found myself reflecting for much of the day. I’m glad to finally be out of the Shenandoah National Park. Early in the week its uniqueness with the waysides and Skyline Drive captured my attention. By today I had just about seen all that I wanted to see. Plus, the trail continued to consist of stretches of the same old gravelly rocks, leaves, and roots. Being able to hike at a quicker pace was welcomed; however, I miss the variation. In fact, as soon as I exited the park portion, a steep descent with large rocks awaited. Usually I would cringe at such a section. Today I actually enjoyed the change of terrain.

I thought a lot about what I’m doing as I walked today. When I began this quest (that seems like an appropriate word), I said that I loved to hike but that I only enjoyed camping a little. After about the first three weeks I altered my terminology to: I love to hike and can tolerate camping. Shortly thereafter I mentally moved to I really like hiking, but I hate camping. Now I seem to be in the: I kind of like hiking, but I detest camping. I fear that I may eventually get to: I’m tolerating the hiking. Please don’t misconstrue. I have no intention of quitting. I’m just trying to resurrect some more enthusiasm.
I am beginning to understand, however, why more hikers quit in Virginia than any other state except Georgia.

Those who really know me understand my competitive nature. So this hike has become more about “getting to the finish line.” I find myself more and more comparing the rigors of the trail to the challenge of finishing a marathon. As I approach the literal half way mark, which I should reach around next Sunday or Monday, I’m reminded of the half way point in a 26.2 mile race. For anyone who has run one, they know it’s not where one would think mathematically. It’s the 20 mile mark. It takes as much mental and physical effort to complete the final 6.2 as it does to run the first 20. So when I reach the half way point on the AT at 1092, I won’t really be half way. That will occur somewhere in Vermont or New Hampshire.

So back to my day, I did meet another trail maintainer from the Potomac Appalachian Club. John was doing some weed eating as I passed by. Numerous day hikers also appeared throughout the afternoon, many not even carrying water, which concerned me considering the heat. There was also a large number of bicyclists on Skyline every time I passed the drive. Other than the 90 degree heat, it was a pretty nice day.
When I reached US 522 at Front Royal, Possible, a 2012 thru hiker, and his wife Lisa had erected a tent and were handing out some trail magic. Even though Mike was already there, I went ahead and had a hotdog and lemonade. Pacemaker and Runner-up were taking a break as well.

Other hikers are at the hostel tonight including thru hiker Newton from Maine. A couple of section hikers from Australia and Bee Man, who lives in the West Indies, joined me on the trek with Mike into town. I shared a booth at Burger King with Bee Man. Experiencing a shin splint issue, he plans to take a zero tomorrow. After the meal I picked up a few groceries. Tugboat and Life-raft had come into Front Royal to re-supply but were going back to the trail tonight.

Now I’m sitting on the steps leading up to a deck at the back of the hostel. It’s been quiet since Mike’s neighbor finished mowing his lawn. There’s a breeze. Thunderstorms are forecast for tonight and tomorrow morning. Even though there’s a chance I may get wet, I’m looking forward to a night at the Bears Den Hostel, one of the best on the entire trail. I’m also getting ready to motivate myself for tomorrow’s 20 miler. After all, I’ll again get to spend all day among the trees and wildlife, and as I keep reminding myself, Don loved the woods. 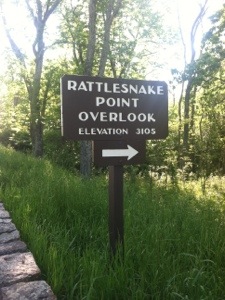 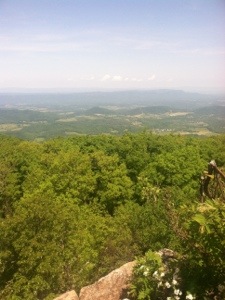 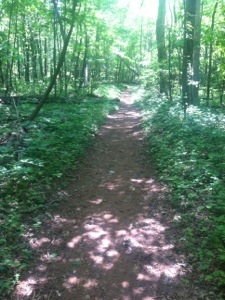