Some say the most important word for thru hiking the Appalachian Trail is flexibility. Due to a cancelled flight by Delta Airlines, today’s plans indeed required me to be flexible. After we found out that Linda’s flight had been re-scheduled to arrive late in the day, I decided to go ahead and hike the 19.6 miles into Boiling Springs with Molar Man. Since my plans didn’t change until late last night, I wound up only getting about five hours of sleep. Still, I hiked strong throughout the day, partly due to following behind the “machine.” Molar man’s ability to set and hold a pace of about 2.75 miles per hour is uncanny. I don’t even check the itinerary as we hike. He keeps me well-informed.

When the alarm sounded at 4:15 I had already been up a quarter of an hour. Thinking I might find an all night restaurant, I headed for our meeting in my rental car at 4:30. A convenience store with hot breakfast sandwiches and coffee met my needs. As daylight approached, I sat in the car having my meal. Then I drove to the rendezvous with Molar Man and Sweet Tooth for the ride back to Pine Grove Furnace State Park and the beginning of today’s hike. No one else was around as we made our way through the manicured park and finally back into the woods.

All went well early until we reached a spot where a white blaze led us down to a impassable stream with no bridge. Not seeing a blaze on the other side, I suspected that we had made a wrong turn somewhere. With his pioneer instinct, Molar Man bushwhacked to a spot to cross. Before I decided to go ahead and just walk through the ankle deep water, I retraced my steps up the trail to discover that the trail we were on should have been blazed blue. It looked as if a previous blue blaze had been painted over with white. When we finally got back to the real white blazes, Molar Man turned up the pace to make up for the ten minutes lost in futility.

After approximately a twelve minute lunch break (long, by Molar Man’s standards), we continued to make good time until we hit the first of two rock mazes. The boulders of various sizes, from large appliances to small homes, required a degree of patience. With blazes aplenty and an arrow here and there, I thought the navigation of the mazes would be fairly easy. There’s that word that has no place on the AT again. Then I looked ahead to see Molar Man standing atop a two-story rock looking for an outlet. His choice of directions worked for him. I went another way which required a little rock scrambling. All in all, the variety was refreshing.

Like the other days in Pennsylvania, a number of footbridges were provided for most water crossings. Late in the hike we passed Center Point Knob where a statue had been erected to indicate the original AT midpoint. A short while past this landmark we found ourselves hiking a path that passed through a cornfield. My dentist/engineer/farmer friend educated me on some aspects of corn growing. He also answered, “alfalfa,” when I asked, “What’s that?” After we walked through the farmland for over a mile and a half, we finally reached the small one way bridge leading into the quaint little town of Boiling Springs, home of the ATC Mid-Atlantic Regional Office.

As the trail enters the town, it passes by a lake. A few fishermen sat in chairs at the bank on the warm, lazy afternoon. One young lad cast his rod as his dad watched. When he said he wasn’t catching anything, I noted, “But you’re having fun.” The dad replied, ” That’s what it’s all about.” On another afternoon twenty or so years ago, that could have been Don and Brent. My brother loved to fish with his son. And Don would have definitely loved Boiling Springs, a town that seems Mayberry-like in a peaceful way. I could see him relaxing by the lake, just enjoying.

It’s been another good day to hike. I shared a special section of trail with someone who has become a good friend. Our hiking styles, as well as our demeanors, seem to complement each other well. Tomorrow we’ll hike together again. For now, however, I’m off to the Harrisburg International Airport to hopefully meet Linda’s plane. If all goes according to plan, when morning arrives, she too will begin to learn just how special life can be on the Appalachian Trail. 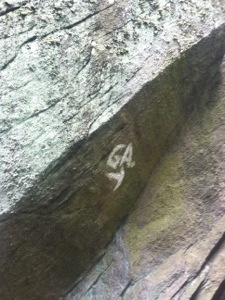 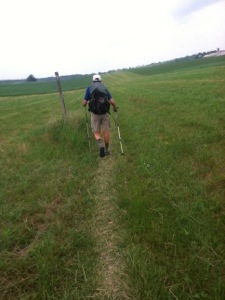 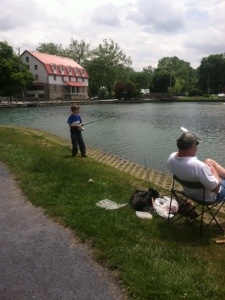