Apparently the section of the Appalachian Trail I hiked this morning is maintained by Old McDonald. From a moo moo here to a corn field there, farm land existed as far as the eye could see. Over fence stiles and through several cow pastures, Molar Man and I hiked the first 10.2 miles to the Scott Farm Trail Work Center where Sweet Tooth and Linda met us for a short break. Then we covered the remainder of the 16.5 miles at a steady pace, finishing today’s hike in six and a half hours. With a few dark clouds overhead on a warm day, it was good to get it done early.

In addition to all the farm land, we also walked across three overpasses. The trail crosses I-76, very busy US 11, and I-81. We also encountered more footbridges in the woods. Some appeared to be new, especially in marshy areas. A portion of the trail ran adjacent to a muddy Conodoguinet Creek. Other than a short climb of about 500 feet just before the Darlington Shelter, the trail remained reasonably flat, muddy, and nondescript for the final six miles up to PA 850 where Sweet Tooth and Linda waited.

When we reached the small parking area, the ladies were talking with Mossy Brown, a 2009 thru hiker. She had heard about my hike from Walker when he, Whiskers, and Rocket had passed through the area about ten days ago. Walker had referred to me after Mossy Brown mentioned having a friend recently diagnosed with ALS. Not having seen any of these hikers since Damascus, it was good to know about where they are now. We chatted with MB for a while before heading back toward Carlisle.

My brother Don stayed on my mind much of the day. From an early deer sighting just off the trail to sections of smashed mulberries, memories abounded. I thought of the mulberry trees he and I had climbed as kids on our grandfather’s farm. Then there was another small pond and of course the creek. But the strongest memory was connected to a dog. In his teens, my brother got an Irish Setter at Christmas one year. Don loved Red and hated to have to have him put down when the old dog got too sick to barely stand. As I walked through the filtering sunlight early in today’s hike, two dogs came charging down the trail. The second, an Irish Setter, looked old and tired. His owner said he was nearly deaf. When I asked his name, she said, “Red.”

Even hiking with a buddy like Molar Man, there are stretches when neither of us has anything to say. I suspect that he, like I, is often lost in memories. Today is Wednesday. On Wednesdays last year Linda and I regularly shared a meal with Don and Lisa. It became our routine to meet at our condo. Don enjoyed wheeling his power chair out over the river before we would go inside. When he could still speak coherently, he quietly stated one night, “I like this place.” He was at peace by the river. I miss those Wednesdays.

So another day has passed on the Appalachian Trail. For me it was day 82. Tomorrow severe weather is predicted, so Molar Man and I are going to wait for morning to plan our day. I’m not sure either of us is interested in any tornado blazing. Still, if it’s just rain, we’ll probably be back on the trail. Today proved to be another day that my brother would have liked. So I will walk on as I keep remembering how much…..Don loved the woods. 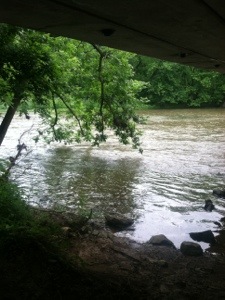 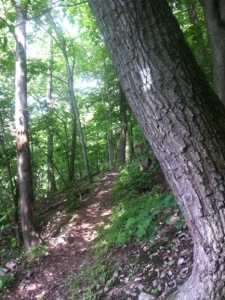 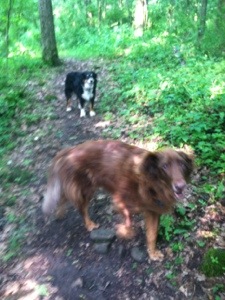