Sometimes we take friendship for granted. We go through our day to day lives aware of who our friends are; however, at times we fail to grasp the significance of the bonding process that has occurred over a period of years. I first met Jimmy when we trained together for the Marine Corps Marathon in 1995. John and I became acquainted when he started running with a group of my buddies a couple or so years later. Over the years, we’ve shared many a mile and story on the roads of Columbus, but none may have been as significant as those we shared over the past three days on the Appalachian Trail. As I sit at a laundromat in Salisbury, CT, I’m already remembering how important and special those past few days have been.

For the second consecutive day I was able to start my day with grits, thanks to Jimmy. Mary was reluctant to serve them with her blueberry pancakes, at least until we assured her the combination would in no way offend us. Having been told that we were seven minutes late for breakfast yesterday, we hustled to arrive in the dining room six minutes early today. I continue to be astounded by what irks some people. I suppose we all have our shortcomings. Nevertheless, starting the meal thirteen minutes earlier than yesterday meant that John, Jimmy, and I could begin hiking a bit earlier as well. So after the ride back to the trailhead, provided by Cooper, we were walking at 8:00.

From the outset, the hike went smoothly throughout the day, that is if my slipping off a rock in the first five minutes can be overlooked. After I stepped about ankle deep into a stream, Jimmy suggested that I just wade across rather than try to get back up on the wet rocks. I took his advice and paid no attention to my wet shoes and socks. John chose to tightrope a blowdown. This was only the first of several water crossings we would encounter throughout the day. Fortunately I did not step in again. In addition to the streams, a “lemon squeezer” type rock formation added a little variety to another rather mundane trail.

But like yesterday, it wasn’t the trail, but the fellowship among friends, that made the hike enjoyable. Neither the heat nor the humidity nor the various biting bugs could detract from our time together. I again talked at times of Don. My thoughts today seemed even more poignant since today is his birthday. And again John and Jimmy listened with heartfelt compassion. We continued to reminisce about our running pasts and share stories about our many running friends. It was such a satisfying way to conclude my buddies’ brief visit to the trail.

Today’s 14 mile hike concluded in Falls Village, CT. John, Jimmy, and I walked the short distance into Main St. and the Toymaker Cafe. We shared a final meal before the two headed toward the train station for a ride into NYC. John even offered some sound advice for the remainder of my hike. Then they were gone. I momentarily turned to wave before walking the 0.2 miles up the road for a lift to Salisbury and a night in the home of Maria McCabe. So I rode in with Maria, did my laundry, and had supper with Pilgrim at a local bistro. As John would want me to say, it’s been another magnificent day on the Appalachian Trail.

On July 6, 1957 Donald Andrews Stephens was born in Columbus, GA. On August 28 of last year he died at the age of 55. ALS took my brother’s life, but his memory lives on in the hearts of those who loved him. He is missed every day by his friends and by his family. The world is a better place because he lived; it is at a loss because he lives in this world no more. I remember all that we shared with happiness that we did. And I celebrate his life every day by remembering how much Don loved the outdoors. Happy Birthday, Donald. 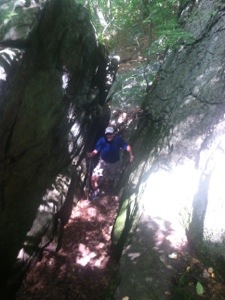 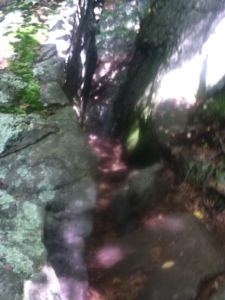 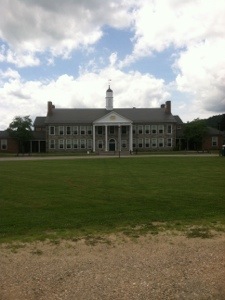