Maria McCabe has been welcoming AT hikers into her Salisbury, Connecticut home for well over a decade. Alton and I stayed a night with her on our section hike of this area in 2004. Even though her prices have risen a bit, the house on Grove St. is still a bargain. When she picked me up at the bridge in Falls Village yesterday afternoon, she seemed genuinely happy to see a hiker who had stayed with her before. With all the hikers who have passed through her doorway, I obviously didn’t expect to be remembered. Asking me when I had previously boarded with her, Maria said she could barely remember last week, or something to that effect.

Part of Maria’s “Hiker Special” is a ride to the laundromat. On the return trip Maria enlightened me with a restaurant review for the area. One of the more swank dining establishments got a thumbs down from the feisty, 80 something young lady of German stock. “It’s too dark inside,” she stated without malice. “The next time I go I’m going to borrow one of the hiker’s
headlamps.” She did add that the food was pretty good, but expensive. All in all, it was an entertaining ride both going and coming back to her home. She also reminded me that she couldn’t cook breakfast, but that hikers were permitted to use her kitchen to cook their own.

Maria also noted that she couldn’t shuttle me back to the trail this morning until 9:00. Since I had only planned the short 8.3 mile stretch between Falls Village and Undermountain Rd., leading into Salisbury, the late start was fine. What I didn’t realize, however, was that apparently most of Salisbury slept in on Sunday as well. When I walked the two blocks to the center of town, not a person was stirring at 7:00. As I walked around, I determined that no businesses opened before 8:00. So I found a comfortable weathered wooden bench under a shade tree and just sat. For a while there I thought I was in one of those “Twilight Zone” episodes where an entire town has disappeared. Finally, a car pulled up and a young man entered a bakery across the street from my bench.

When a local church’s bell tower eventually tolled eight, I walked the block to the bistro and ordered a bacon and egg breakfast. I wish I had thought to bring a package of the grits Jimmy left with me. I wonder if my waitress would have supplied me with a bowl of hot water. I’ll definitely give it a try sometime. Just as I finished my meal, Colin walked in. Having hiked in from a campsite, he chose to dine outside. I asked for a third cup of coffee and joined him. After a short chat, I ambled over to the market around the corner before heading back to Maria’s. As soon as I retrieved my pack, we were in her car on our way back to the AT.

Starting at the bridge, I had barely walked into the woods when I stopped to view the falls cascading into the river. At the next road crossing I met for the first time Miles From Nowhere who was hiking the same section as I was today. After these two short breaks, however, I just took off and hiked at a steady, fairly fast pace all morning. Again today, I walked up on another deer grazing on the trail. She moved over to let me pass but really didn’t seem too affected by my presence. There was a fairly good view from 1475 foot Mt. Prospect and an even better one of the field called Rands View. Despite missing my buddies, I felt OK hiking solo today.

When I arrived at Undermountain Rd., I walked the approximately half mile back to Maria’s home, ending my trail day before 1:00. For the remainder of the afternoon I have just been relaxing. The two brothers from Germany, Restless Cowboy and Fresh Coke, are also staying the night. Fresh Coke is having a lot of trouble with the humidity. He looks a bit whipped, so I hope the town night will restore some of his energy. As for me, I’m about to head back down to the bistro for another opportunity for some fine dining in Salisbury. I need all the calories I can handle so that tomorrow I can hike northward strongly on the Appalachian Trail. 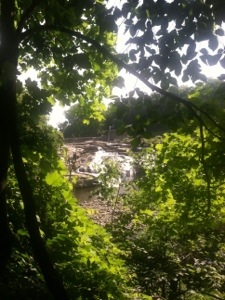 One thought on “Salisbury, CT”