The story goes that when he observed the slope of Mt. Greylock in the winter, Herman Melville was inspired to create the 19th century novel Moby Dick. The eventual classic, published in 1851, would be one of only two that I did not finish reading the semester I took The American Novel. I have a theory that only a handful of people in the entire world have ever read every page of the prodigious masterpiece. So today when I made my assault on Mt. Greylock I took about fifteen seconds to pay homage to Melville. Those were the only seconds I could spare on what turned out to be an almost relaxing 14.7 mile day. With varying weather patterns to contend with, my two hiking companions and I not only scaled Greylock but did so at a steady pace and without a break.

The day commenced with another hearty breakfast of pancakes, eggs, bacon, and coffee at the Chef’s Hat outside Williamstown, MA. Banzai, Pilgrim, and I were then transported back to the trail in Cheshire by Tom Levardi. We greatly appreciated Tom taking the time to do a rather long shuttle. Longskirt also joined us for the ride.

We all began today’s hike together from where we had left off yesterday at the post office.The trail continued through the sleepy town of Cheshire for a short distance before turning into the woods. Then the first of several climbs confronted us. Banzai and I hiked ahead as the elevation increased from 1007 feet to 3252 over five miles. This was the first time the trail had been above 3000 feet since Virginia. With the higher elevation, mosquitoes suddenly became non-existant, at least for the day.

After passing the Jones Nose Trail, we braced for the ascent of Greylock. What we had anticipated as being strenuous actually turned out to be just another moderate climb. When we reached the summit we found ourselves in a cloud and light mist. The highest peak in Massachusetts, Greylock is also the home of Bascom Lodge. Banzai, Pilgrim, and I had the good fortune to eat a hot meal right on the trail for the third straight day. Lots of folks were hanging out at the lodge. Most, however, had driven up. There was even some kind of Native American drum presentation underway. We just had our lunch and walked back out into the fog.

As we started our descent the cloud cover came close to concealing the blazes. In fact, we wandered briefly before finding the correct direction. When we did get going Banzai quickly hiked away from Pilgrim and me. With only 6.3 miles to walk in the afternoon, we had high hopes of finishing much earlier than the last two days. Knowing that we still needed a shuttle from the trailhead at MA 2, I called Ellen McCollum from the ATC list. What a terrific surprise it was to discover that Ellen was not only a former thru hiker (2000), but that she had been reading my trail journal. Bagel was happy to provide my buddies and me with a ride.

After a very steep, time consuming descent to 660 feet, Pilgrim and I walked the 0.5 miles on Phelps Ave. to MA 2 where Bagel was waiting. Banzai had already arrived and was enjoying an extra large cookie and a bottle of juice. Trail angel Bagel had cookies and juice for Pilgrim and me as well. After some brief getting acquainted, Bagel drove us back to our motel. I continue to be humbled by the fine people I am meeting along my way. I can’t thank Bagel enough for her kindness and generosity.

All of a sudden everything seems to be going great again. Another potential trail angel, Steve from Bennington, VT, sent me a message today offering any help we might need while we’re in his neck of the woods. When I called him about a ride after tomorrow’s hike, he suggested he pick up our gear here in Williamstown so that we can slack into Bennington tomorrow. Things are really coming together. Banzai and I have gone so far as to declare this “The summer of George.” Pilgrim has no idea what we’re talking about.
So in the morning my two buddies and I will hike out of Massachusetts and into Vermont, state number 12 on the Appalachian Trail. It’s all coming together, folks. 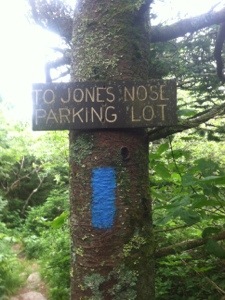 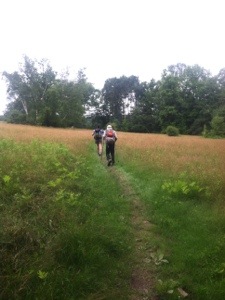 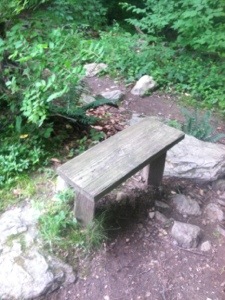 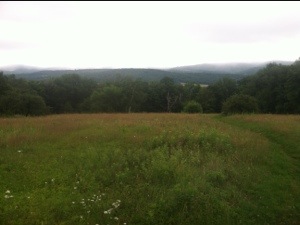 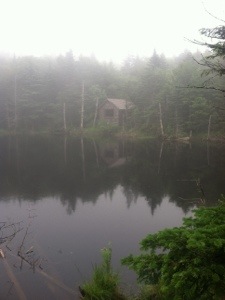 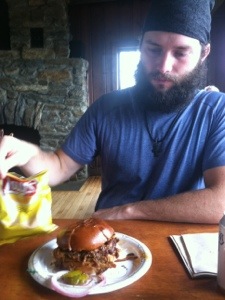