So today I crossed the state line in the middle of the woods, entering Vermont with Banzai and Pilgrim on a tiring 18.4 mile day. Now in Bennington, VT in the comfort of another “mom and pop” motel, I find myself with a mere or staggering (depending on how one looks at it) 580 miles remaining. If all continues to go as scheduled (if planning is truly possible) I should have six Sundays left of my thru hike of the Appalachian Trail. As I ponder the magnitude of what still awaits, I reflect on “the day that The Lord hath made.” Despite periods of loneliness, discomfort, and fatigue, I try “to rejoice and be glad in it.” Whatever the circumstance, Sundays always seem to offer some semblance of purpose for this endeavor that I have undertaken. I appreciate the Lord’s Day on the trail.

So after another wholesome breakfast at the Chef’s Hat, I joined Banzai and Pilgrim for the ride back to the trail near North Adams. Once again, Steve Labombard provided the trail magic transportation. After crossing a pedestrian bridge, we walked briefly on a neighborhood street before heading back into the woods. And folks, I mean the woods. Our streak of three hot lunches abruptly ended as we didn’t even cross a paved road until we reached the end of today’s hike at VT 9 near Bennington. This was the most isolated section of trail I have hiked since…..honestly, I can’t remember a section this much in the wilderness in some time.

Even though we climbed over 2000 feet during the course of the day, it wasn’t the elevation change that caused the most frustration. It was the MUD. Seeping, oozing, “sucking up a shoe” black mud was everywhere. Although we had been forewarned, my frustration level increased with each new section to navigate. After a while it became obvious that there weren’t enough rocks and sticks to step on to avoid the yucky substance. My blue trail runners now have taken on a new appearance. The only saving grace was that no rain fell on us today.

Early in the hike Banzai continued to fascinate Pilgrim and me with his wealth of knowledge on such a wide variety of subject matter. For all practical purposes, Banzai is a walking encyclopedia. From Roman history to Greek philosophy to Christian theology to classic literature to the NBA, Banzai can conduct a walking lecture while scaling rocks or attempting to circumvent mud. Whatever subject I broached, Banzai immediately began a diatribe that left me admiring his intelligence and Pilgrim shaking his head in disbelief that the young man is so knowledgeable. We both suggested Jeopardy.

About four miles into today’s walk we passed the sign welcoming us to Vermont. For the next few days the AT and the Long Trail are the same. Eventually, the Long Trail will bear off to travel northward until it reaches the Canadian border. After stopping for some pics at the state line, we hiked steadily until noon when we took a lunch break on some rocks under a power-line. A cool breeze kept the bugs away while we ate. In the afternoon we met three southbound thru hikers, Danko, Four Meals, and Righteous. All had started between May 31 and June 6. It should now be a pretty regular occurrence to see southbounders on their way to Georgia.

As the afternoon waned Banzai hiked ahead, leaving Pilgrim and me to walk quietly for the last three hours. Other than the mud, nothing else stood out except for the dangerously steep descent to the road at the end of the day. Even though there were rock steps for much of it, the final mile required a concentrated effort and extreme caution. Pilgrim followed as I tried to select the least perilous path to the highway. When we finally reached the road Steve was waiting with a cold Mountain Dew for me and chocolate milk for Pilgrim. Banzai was already there, sitting on the tailgate sipping on a coke. We quickly drove the five miles to town and a motel. After sharing a room the past three nights, we decided to each get our own today.

It’s almost dusk. My buddies went for an early meal. I wanted to write first, so I’ll be dining alone tonight. A little solitude can be comforting at times. After all, tomorrow I’ve planned a zero day. After hiking 18 consecutive days, I feel like it’s time for a break. I can’t think of a better place for a respite than Bennington, a town with some nice shops, cafes, and a good bit of history. So tomorrow I’ll rest. Then on Tuesday Pilgrim, Banzai, and I will continue the journey through Vermont on the Appalachian Trail. 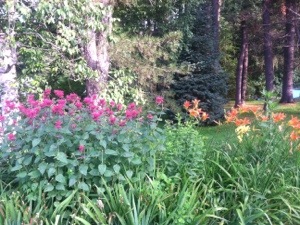 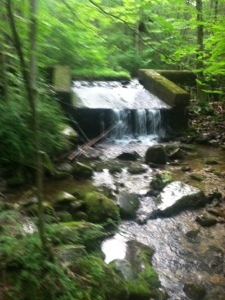 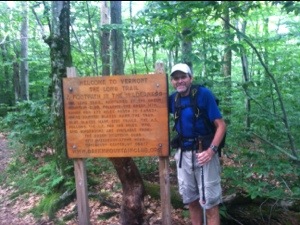 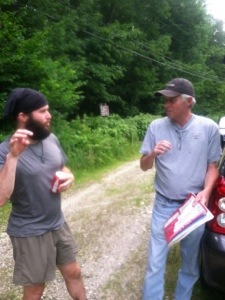