I’m tired. Really tired. Too tired to write tired. It’s been a long day on the Appalachian Trail. Banzai, Pilgrim, and I are waiting for a shuttle at Forest Service Rd. 71, essentially “in the middle of nowhere.” It’s the first road we’ve crossed all day. It’s the only “out” if we want to continue with Don’s Brother’s Method. Knowing that a shower, meal, and bed are in our immediate future, we are happy to wait. It’s 7:40. This is the latest I have been on the trail the entire hike. Hopefully, Steve will arrive at the pre-determined time. I didn’t bring my head lamp. Pilgrim has his. Darkness is still an hour away. Biting flies and mosquitoes have infiltrated our space, or are we the interlopers? I’m really tired.

Earlier this morning Banzai asked, “What state are we in?” “It’s the damn sameness of this thing that kills me,” Pilgrim grumbled, as we took a short break after about five miles of a planned 20.6 mile day. We could still be in Georgia based on the redundancy of the terrain. With only twenty-five percent of today’s hike complete, we’re all already a little edgy. It’s hot and humid even though it’s still morning. Isn’t Vermont supposed to be cool? What state are we in?

We walk on, still grumbling about the mud, bugs, and humidity. Even Banzai isn’t as eager to lecture today. I eventually mention Tennyson’s “Ulysses,” and the discussion is on.. Miles go by more quickly with conversation. So we hike and talk. Pilgrim lingers fifty yards behind. We pause occasionally and he catches up. He adds a comment now and then. We hike toward the first shelter of three we’ll pass today, three AT thru hikers caught somewhere between happy and miserable. Time passes……time passes…….time passes

At the Goddard Shelter we stop for lunch. We each have a bag of McDonald’s hamburgers that we purchased in Bennington. I have a root beer as well. The shelter is one of the nicest I’ve seen. If it were later in the day and I had all my gear and my gear included a sleeping bag and I had more food, I might even enjoy staying here. We eat leisurely. Pilgrim leans against the back of the shelter with closed eyes. Banzai suggests we make it a long lunch since we aren’t getting picked up until 8:00. We eventually decide to continue the hike before Pilgrim falls asleep. I save one burger and half my root beer for later.

What state are we in? The trail looks the same. We stop at the Glastenbury Mountain lookout tower. Banzai and I climb the metal steps. Banzai reaches the top. I stop two rungs short when a strong wind rocks the structure. Pilgrim waits below. Banzai and I take pics and then descend the steps. This would be our only view of the day. The trail in fact is so remote that there is a six mile section in the thru hiker’s handbook that has no listings. No roads, no streams, no shelters, nothing to write about for six miles. We are definitely miles from nowhere.

We hike on to the next shelter, Kid Gore. This shelter has a reputation as being a haven for porcupines. We see none in the mid-afternoon. James, a section hiker who has only been on the trail three days, plans to stay the night. I warn him about the porcupines. He says no one has mentioned them in the registry. Maybe they’ve moved elsewhere. I eat my final burger and finish my root beer. Banzai thinks we should take a longer break again. We do. I’m already tired and we still have six miles to hike. A rare breeze momentarily replaces the hot, humid afternoon. The biting flies continue to annoy. What state are we in?

We hike over rocks, through black mud, across streams, avoiding roots and swampy areas. As the afternoon diminishes, fatigue increases. My two buddies and I stop at another shelter for a final break. Story Spring Shelter offers a picnic table at which to rest. I’m bordering on exhaustion when I remember a new bag of jelly beans in my pack. I tear open the package and share them with Banzai and Pilgrim. With only 1.6 miles to the road and the end of the day, I pick up my pace. Banzai hikes ahead. Pilgrim maintains my pace. The jelly beans are working. At least temporarily, I’ve regained some strength.

Steve Labombard arrives with a cooler of soft drinks. We head up the gravel road for the hour drive back to Bennington. Steve comments that he saw a moose feeding on the way up. The moose is still there. We stop. I get out for a pic. The moose ambles away. A baby suddenly emerges from the marsh and follows. Steve offers a informative lecture of his own on the drive. Banzai is captivated by Steve’s knowledge of the surrounding area. Agreeing to stop for us to pick up food, Steve goes beyond our expectations. I easily elevate his status to #1 among trail angels I’ve met.

So now it’s late. I feel less tired now, however, than I did three hours ago. My alarm is set for 6:00. We need an early start tomorrow to make Manchester Center, the next town in Vermont. We’re in Vermont on one of the most remote sections of the trail. It’s been a tiring day, but I feel good. Banzai and I decided today that we would start focusing on the miles remaining in addition to those we’ve already hiked. So we now have 557.6 miles left to hike. Tomorrow we’ll attempt to erase 19.5 of them as we continue walking through Vermont on the Appalachian Trail. 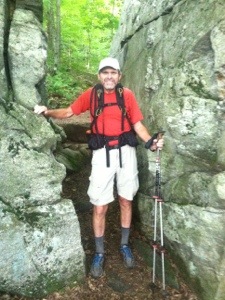 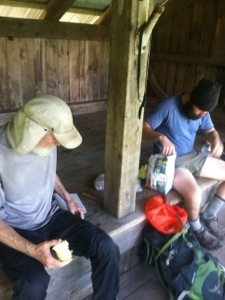 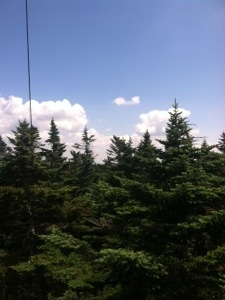 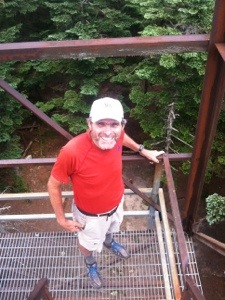 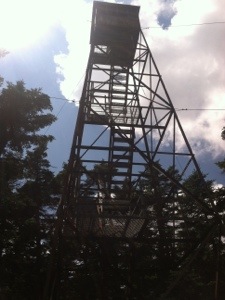 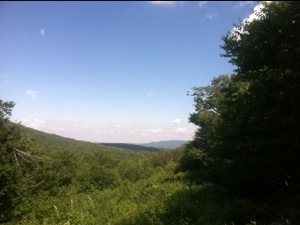