Tuesday, July 30….”Ahhh MAN” is a favorite expression of mine when something really spectacular occurs on the trail. Today I uttered the expression multiple times as I summited three 4000 footers and walked along the Franconia Ridge. I may have to check a thesaurus to fine more descriptive adjectives for the views I have had the privilege of observing over the past three hikes. Breathtaking, spectacular, awesome, and majestic just don’t seem to do justice to the White Mountains of New Hampshire. These mountains are beyond description. Today I felt like I was a part of a postcard for much of the morning. I just hope my pics in some way capture the grandeur of where I am hiking.

Before Banzai, Pilgrim, Slim, and I even began our hike, we had to walk a one mile side trail back to the AT. These extra miles don’t count for official mileage, so our total AT mileage for the day was 13.0. Like Sunday, the miles were rough. In fact, it took me almost twelve hours to compete the hike. With continued difficult, at times treacherous terrain, by he end of the day I was drained both mentally and physically. A 13.0 mile day used to be a nero. I could hike that mileage and have half the afternoon free. In the Whites, however, I’m exhausted after completing the day.

When my buddies and I did reach the trail we were immediately greeted with almost a 4000 foot climb to the Franconia Ridge. With a fairly navigable trail early in the morning, we made good time to the Liberty Springs Campsite. Cam, a caretaker at the area, emerged from his tent to give us some information about the trail conditions. From there we continued the pursuit of our first of three 4000 footers, Little Haystack. Totally overwhelmed with the surrounding beauty, I shot some video as I exclaimed my first, “Ahhh MAN.” With the wind blowing at a predicted 35 miles an hour, I put on my rain jacket and later gloves. At one point the wind actually blew me over.

After Little Haystack we walked along the Franconia Ridge to Mt. Lincoln at 5089 feet and then Mt. Lafayette at 5289. We all paused often and took numerous pics along the ridge line. Even though we were sporadically in the clouds, views prevailed in most directions. I literally felt like I was on top of the world. It was beyond exhilaration. A few section hikers were hanging out at the summit including a hiker from Ireland who was hiking with a man from Montreal. We also saw thru hikers TK and Mountain Goat. Later in the day I would see Roadrunner, a hiker who had started from Springer two days before I started, but that I had not seen until Saturday on Moosilauke.

The ridge walk was by far the highlight of the day. Unfortunately, we eventually had to come down from the ridge and reenter the trees. The trail then became another time consuming sea of large rocks. Some required precise maneuvering in order to get down the wet slabs. Interspersed were some uphill sections which required rock scrambling. These weren’t as difficult as Kinsman, but they still demanded focus and concentration. The most challenging section for me came after the fourth 4000 footer of the day, Mt. Garfield. After the climb we encountered a very steep, precipitous descent. With numerous wet rock slabs to negotiate, I had to sit on the seat of my pants and inch my way down on a couple of occasions. The treacherous descent took its toll on me. Feeling mentally fatigued, my pace slowed radically.

In the afternoon Banzai hiked on to Galehead Hut, hoping to get a work for stay at the AMC maintained facility. Eventually, Slim also hiked ahead to make sure he, Pilgrim, and I had a bunk. Meanwhile I kept working hard to find ways down the rocks without falling. It proved to be a definite challenge. Pilgrim and I hiked deliberately, finally reaching the hut just as dinner was beginning. It was good to have a solid meal awaiting. The crew members at the hut were most accommodating. Each member introduced him/herself and talked about their most serious injury. They seem to be really nice young folks.

So I have now completed three hiking days in the Whites. By far, they have been the toughest. I’m physically tired. I’m mentally tired. I’m seriously ready for this hike to reach its final destination. The beauty on the ridges easily surpasses the difficulty of the dangerously perilous rocky ascents and descents. I’ll try to keep remembering that tomorrow as I continue the White Mountains of New Hampshire. I’m OK. If this were easy the success rate would be higher than the usual 20%. So early in the morning I’ll be at it again as I head toward Maine on the Appalachian Trail. 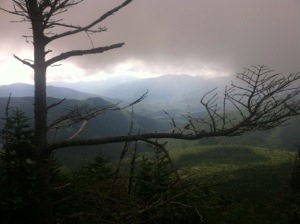 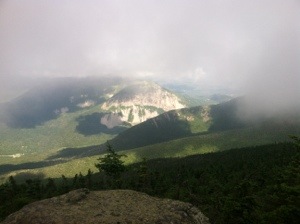 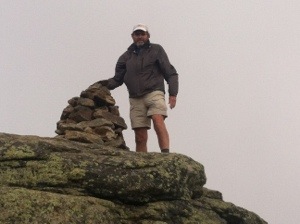 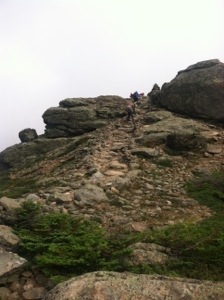 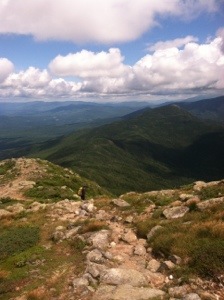 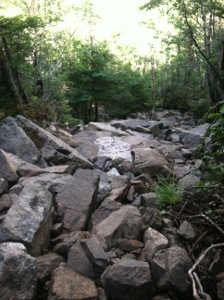