As the hike gets tougher, so does finding the time to write about it. Although not as difficult as yesterday, today’s hike still took us almost ten hours to cover the 14.7 miles. With a fairly flat path over the final eight miles, I actually felt like I was hiking again rather than rock climbing. For the first time in the last week I didn’t have to watch my feet hit the ground with every step. At one point Slim and I even engaged in a conversation for a couple of miles. Lately it’s been almost impossible to hike (rock climb and rock scramble) and talk at the same time.

After an evening at the Galehead Hut, Banzai, Pilgrim, Susquehanna Slim and I headed up the trail at 6:45. The initial climb of over 1000 feet in 0.8 of a mile was one I remembered from a previous trip to the Whites. That time I had been hiking south. The climb north didn’t seem quite as challenging. We reached South Twin at 4902
feet in less than an hour. Unfortunately cloud cover prevented us from experiencing a view. From South Twin we had to walk over a short boulder field before reaching another 4000 footer, Mt. Guyot. By this time the clouds had dissipated enough for a view to the west.

From Mt. Guyot we descended almost 2000 feet to Zealand Falls Hut where we stopped for lunch. Several day hikers and section hikers were milling around. One hit us with a barrage of questions after discovering that we were thru hikers. Banzai answered most. The questioner said, “That’s amazing!” approximately 87 times during the ten minutes of interrogation. Like so many others, he and his wife marveled at what we are doing. No one yet has looked at me and said, “That’s insane.” I kind of wonder why. The hut crew offered us some complimentary soup since we were thru hikers. I declined but the others accepted their generosity. I’ve never much cared for black bean soup.

When we finished lunch, we embarked on the final 7.9 miles to Crawford Notch. With the gentler terrain we soon realized that we would be finished much sooner than originally anticipated. Along the way we met a southbound thru hiker from Georgia. A recent graduate of Emory in Atlanta and a Braves fan, Gospel plans to go into the ministry in the United Methodist Church. Gospel is the first hiker I’ve met from my home state in a good while. Other than a few day hikers and a couple of trail runners, we saw no one. One young lady with two beautiful, well-behaved labs, met us twice, having been hiking on a loop course. In the Whites there are numerous trails that meet with the AT at various junctures.

So with comfortable temps and hike-able terrain, my buddies and I reached Crawford Notch before five. Mike was waiting to drive us to Gorham for a meal and a room. Our shuttler and support person has to leave us tomorrow, so we will then have to go back to hitching rides and using shuttle drivers off the thru hiker list. It’s been good having Banzai’s brother for the past two weeks, but now he must return to the regular world. In some ways I’d like to join him. That time, however, will come soon enough. For now the presidential range awaits as Banzai, Pilgrim, Slim and I meet Jackson, Pierce, Eisenhower, and Monroe tomorrow on the Appalachian Trail. 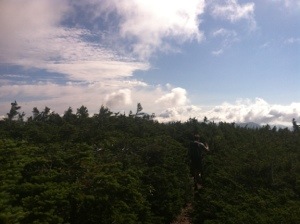 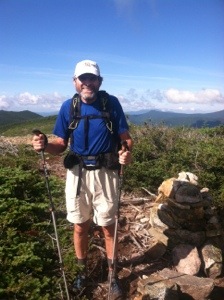 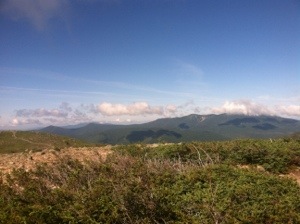